To share your memory on the wall of Carmel Camarillo, sign in using one of the following options:

Print
Carmel Camarillo 93 passed away May 27, Carmel was born in El Paso TX, Dec. 21 1927. Her parents were Ramon & Juanita Camarillo. She was raised in the Joliet, Fromberg, Edgar area of Montana

Her siblings include brothers: Manuel (Billing... Read More
Carmel Camarillo 93 passed away May 27, Carmel was born in El Paso TX, Dec. 21 1927. Her parents were Ramon & Juanita Camarillo. She was raised in the Joliet, Fromberg, Edgar area of Montana

She was employed at the Rex (Big Sky Linen) for over 30 years. She enjoyed sewing & cooking. Anyone who grew up on the Southside of Billings had some of her infamous Chicken Molè & Spanish rice. She was enjoyed showing friends & family new words in sign language.

Viewing can be done at Smith's funeral chapel Tuesday & Wednesday. Funeral services will be held Thursday June 10, at 9AM reception following at Central Park

Please wear something pink or floral in her honor.
Read Less

To plant a memorial tree in honor of Carmel Camarillo, please visit our Heartfelt Sympathies Store.

We encourage you to share your most beloved memories of Carmel here, so that the family and other loved ones can always see it. You can upload cherished photographs, or share your favorite stories, and can even comment on those shared by others.

Plant a Tree in Memory of Carmel
Plant a tree 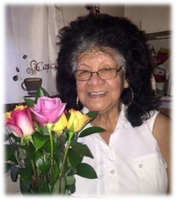