To share your memory on the wall of Nanette Ehrmantraut, sign in using one of the following options:

We encourage you to share your most beloved memories of Nanette here, so that the family and other loved ones can always see it. You can upload cherished photographs, or share your favorite stories, and can even comment on those shared by others.

Posted Jun 02, 2021 at 07:03pm
Sending thoughts and love to Nan's family. We were friends when she lived on Marshall Drive and kept up our friendship over the years. I have many sweet memories of Nan. Sorry I was unable to attend her funeral.
Sandy Regnier
Comment Share
Share via:
BL

Carolyn and I are so sad to hear of Nanette's passing...We remember the Goddard girls from Garden Avenue...we were neighbors of theirs...Nanette and Carolyn were the same age and attended West High as the first graduating seniors in 1962...Naomi and my mom often helped each other with gardening tips and canning...You are all in our thoughts and prayers...Betty Rossell Leppart
Comment Share
Share via:

Posted May 30, 2021 at 10:40am
I was given the privilege of working with Nan all her years at Selover Buick and UNDERRINER Motors. She and the others ladies we worked with always had great get togethers as fellow coworkers annoying time away from the workplace. 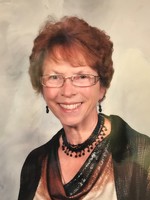