To share your memory on the wall of Richard Phelps, sign in using one of the following options:

Rich Phelps was about as “old school” as they come. He loved his family, his club, his brothers, riding his motorcycle and his chosen way of... Read More
RICHARD EUGENE PHELPS JR
LEATHERNECK WHEELZ
February 8, 1951 – April 14, 2021

Rich Phelps was about as “old school” as they come. He loved his family, his club, his brothers, riding his motorcycle and his chosen way of life. Brotherhood wasn’t just a word to him, and that peace-loving hippie turned biker was everything the word brotherhood means.

Rich, Dog (Pooch to an extremely select few), Gray Dog or Wheelz, depending on which part of his life you knew him, fought hard to beat everything in life that tried to take him down. In the end, when his body couldn’t fight any longer, his mind continued to fight instead. Covid-19 may have been the only thing stronger than he was, but in those three very short weeks he never gave up and continued to fight to the very last second.

All during his life he was a jack of all trades, proud Marine for 7 ½ years, student, warehouseman, welder, hydraulic mechanic and finally a fabricator of many items’ prosthetic. After a handful of years and more surgeries than I can remember, he got bored with being home and decided to go back to work. He was so proud of his most recent announcement when he came home one day and showed me his new prosthetic leg and said “I made this all myself! “

Riding his bike, being in the wind and riding until the gas tank was almost empty made Rich the happiest. Many fond memories were made between Rich and Dan when they would just take off and go for a ride. If you have ever had the privilege of riding with him long distance you will know that “iron butt” is totally appropriate for how many miles he could ride in one day. His daughter, Annelisé, can attest to that when they rode together from Billings to Las Vegas to southern California and back home last summer. I’m sure his adventurous nature started when he was around 3 or 4 when he was found in 3 foot of snow, swinging in the backyard of his Iowa home, dressed only in his skivvy drawers or at the age of 21 when he hitchhiked from southern California to Connecticut and back on a single quarter and still had that same quarter in his pocket when he got back!

Fast forwarding through many years of trials and tribulations, Rich has an awesome score card in life. His surviving family members include his wife, Sue, together for 49 short years, son Shaun Kook (wife, Heather Kook), son and daughter, Dan and Annelisé Phelps, 8 grandchildren, Halie Kook, AshleyThomas, Oliver Kook, Siera Phelps, Lexi Phelps, Braden Kook, EmmaLyn Taylor and Esmie Kook as well as his special fur baby, Sadie, his sister Lynn Hines, many nieces and nephews and club brothers, current and past, also can’t be forgotten. He treasured his brothers so much that words can’t describe those feelings. JJ, Pockets, Shitty Smitty and Joe have all been friends with Rich for so long (JJ back to their Marine Corp days) that they should be blood brothers instead of “friends”, He would have laid down his life for any of them, club or otherwise.

As I sit here trying to put his life on paper, I think about how much he is loved and how very much he loved me, how hard it was to get him to smile for pictures, how he liked doing things for me that he knew I would appreciate and how he wanted to live for another 70 years (God help us all!). I also can’t help but wonder why it was necessary for the path in life that he walked suddenly had to turn skyward and take him so soon. . . .
A graveside service with full military honors will be held at 2:00 p.m. on Friday, May 14, 2021 at the Yellowstone National Cemetery, 55 Buffalo Trail, in Laurel, MT. Condolences for the family may be shared at www.smithfuneralchapels.com.
Read Less

We encourage you to share your most beloved memories of Richard here, so that the family and other loved ones can always see it. You can upload cherished photographs, or share your favorite stories, and can even comment on those shared by others.

Plant a Tree in Memory of Richard
Plant a tree 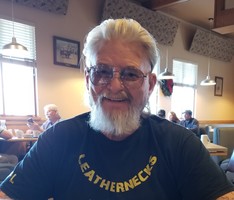