To share your memory on the wall of George Sant, sign in using one of the following options:

Print
George Sant passed away peacefully, into the arms of his Heavenly Father and his beautiful wife on March 27th, in Billings.

George was born in Preston, Idaho, to Lester and Retta Sant. He spent his first 7 years in Idaho, and as a small... Read More
George Sant passed away peacefully, into the arms of his Heavenly Father and his beautiful wife on March 27th, in Billings.

George was born in Preston, Idaho, to Lester and Retta Sant. He spent his first 7 years in Idaho, and as a small boy told us about selling newspapers on a corner in downtown Boise. Later the Sant family moved to Ogden, Utah in 1937; growing up he followed in his dads footsteps helping out as a meat cutter at the family grocery store.

He graduated from Ogden High School and went to earn a bachelor’s degree from Weber State College. He married Violet Sandoz in 1950, served in the US Army from 1951 to 1953, stationed in Germany and finished as a Sergeant.

George and Vi had 4 children while living in Ogden and Salt Lake City and later moved to Billings, Montana. They spent a few years in Sheridan, Wyoming owning and running the 4-U Drive In then back to Billings. George decided to start his own business, GEO distributing, that he later co-owned with his son Wade.

George was a committed member to the Al-Bedoo Shriners of Billings. He had a passion for the outdoors and a love of Montana that he taught to all of us kids. He loved skiing, he played a lot of golf, he shot at least one “hole in one“ at Pryor Creek golf club. He spent time hunting, his sons and grandsons have many hunting stories to tell, most of the time getting his pheasant limit. He loved fishing, from the trout in the Boulder River to the big game fish in Hawaii.

George will join his wife of 70 years Violet, that preceded him by only two months, his oldest son Michael and grandson Tyler, his parents and sisters Joy and Sharon. George leaves behind his sons Kevin and Wade (Melanie), daughter Joni (Gordon), 10 grandchildren and 19 great grandchildren. A service will be held at Smith West Funeral Chapel, April 16 at 2 PM, a celebration of life will be held this summer on June 18th. Condolences may be shared with the family at smithfuneralchapels.com.
Read Less

We encourage you to share your most beloved memories of George here, so that the family and other loved ones can always see it. You can upload cherished photographs, or share your favorite stories, and can even comment on those shared by others.

Plant a Tree in Memory of George
Plant a tree 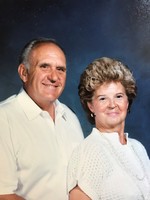