To share your memory on the wall of Jessica Woods, sign in using one of the following options:

Print
Jessica Leigh Woods passed away on February 15, 2021. The cause of her death is unknown.

Jessica was born on April 7, 1984 to Paul and Cheryl Lautenschlager. From her early childhood she had a special love for life, family, and animals. ... Read More
Jessica Leigh Woods passed away on February 15, 2021. The cause of her death is unknown.

Jessica was born on April 7, 1984 to Paul and Cheryl Lautenschlager. From her early childhood she had a special love for life, family, and animals. She loved unconditionally and was a devoted mother. Jessica also had a talent and passion for crafting and sewing.

After relocating to Georgia for several years, she moved back to Montana with her family in 2017, and they settled in Billings. She was employed with Alternatives, Inc., where she served as a Client Advisor Supervisor.

We encourage you to share your most beloved memories of Jessica here, so that the family and other loved ones can always see it. You can upload cherished photographs, or share your favorite stories, and can even comment on those shared by others.

Posted Feb 26, 2021 at 02:14pm
It was an honor for me to have had the privilege of knowing such a special person. Not to often do you run across such a caring and loving human being. I will truly miss Jessica and wish that everyone would have had longer with her. All to often she would tell her co-workers "I appreciate you", Jesse, want you to know that "we appreciated you more". My heart goes out to all her family. Know that she will be looking over you forever. Debra Pelensky
Comment Share
Share via:
PD

Posted Feb 24, 2021 at 08:44pm
We think Jesse invented “the” smile! She radiated goodness and pure joy through her constant smile. Every time time someone reaches out with a heartfelt smile we will remember Jesse and know she lives on. Prayers and of course smiles through tears to her loving family. Love Cort and Paulette
Comment Share
Share via:
KE

Posted Feb 17, 2021 at 10:48pm
I will miss Jessica's warmth, kindness, and talent at Passages. My heart is broken for the family and I am praying for you. I know Jessica made you all proud. She is such a loving soul.
Comment Share
Share via: 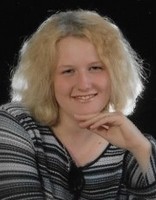