To share your memory on the wall of George Kroll, sign in using one of the following options:

Print
George Kroll, loving husband, father, brother, grandpa and great grandpa, went to be with the Lord on January 3, 2021. He was surrounded by many loved ones as he passed peacefully on to Heaven.

George was one of fourteen children born i... Read More
George Kroll, loving husband, father, brother, grandpa and great grandpa, went to be with the Lord on January 3, 2021. He was surrounded by many loved ones as he passed peacefully on to Heaven.

George was one of fourteen children born in Bridger, MT on October 7, 1938 to Paul and Monica (Sticka) Kroll. He spent his childhood working on the family farm and attending school in Bridger, MT where he later graduated in 1956. George continued to keep in touch and get together with his high school classmates leading up to his passing. After graduating high school, George enlisted in the Army in 1958. After four years in the service (1958-1962), he returned home to Bridger and soon married the love of his life, Mary (Weiss) Kroll on May 4, 1963 in Lockwood, MT. George and Mary had two beautiful daughters, Georgia and Michelle.

George graduated from Montana State University in 1970 with a Bachelor’s degree in Business. His love of the Bobcats continued throughout his life. He had many careers specializing in accounting up until his early retirement.

George took great joy in spending time with his two grandchildren, Lana (Scott) Nelson and Morgan Scott. As his grandchildren grew up, he greatly enjoyed attending any and all sporting events up until they finished college. Even after their sports careers ended, you were very likely to see George attending sporting events of extended family members.

George dedicated much of his later life to creating experiences for his family. He took great pleasure in being able to take his family on wonderful trips to celebrate meaningful moments.

George was always on the move and loved staying active. George and Mary greatly enjoyed polka dancing with friends and would travel the country for a good polka fest. George also greatly enjoyed playing cards, which allowed him to visit and laugh with those he loved most.

In remembrance of George, memorials may be made to the Special K Ranch in Columbus, MT, Ronald McDonald House in Billings, MT or Yellowstone County Relay for Life or a charity of your choice in George’s name.

It’s always hardest to say goodbye to our heroes. Visitation will be held from 4-7 PM Thursday, January 7th at the Smith Funeral Chapel in Laurel with a sharing time at 5:30 PM. Graveside services will be held at the Bridger Cemetery on Saturday January 9th at 2 PM.
Read Less

To plant a memorial tree in honor of George Kroll, please visit our Heartfelt Sympathies Store.

We encourage you to share your most beloved memories of George here, so that the family and other loved ones can always see it. You can upload cherished photographs, or share your favorite stories, and can even comment on those shared by others.

Posted Jan 13, 2021 at 01:12pm
George was a good friend who made people glad to be around him. He had a ready smile jovial words. He was part of our crew building our log home WE miss George and his legacy lives on thru his children and grandchildren. Gwen Aubrey
Comment Share
Share via:
LS

You Were A Very Good Brother 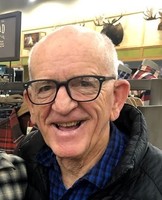