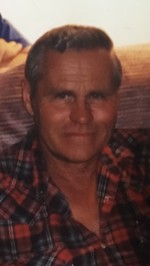 Virgil J. Larsen, our Hero, Dad, loving Husband, Grandpa, Uncle and Friend, passed away after a long illness on December 29, 2020 in Billings, MT.

Virgil was born to Jens Lourtis Larsen and Julia Sorensen Larsen, May 31, 1935 in McCabe, MT. He was raised on a small farm and went to school in McCabe and Sidney, MT. His best friend was his brother, LeRoy Larsen.

He was drafted by the Army in 1952 and proudly served in Germany. He married Betty Jo Redding in 1954 and together they created an amazing family which was his greatest treasure.

He worked road construction, operating heavy equipment and was instrumental in helping to build the new interstate highway system in the 1960’s. This work kept him away from his family months at a time, so in 1965 the family moved from Sidney to Billings where he started Larsen Tree Service and also worked for the City of Billings street department until his retirement. The kids remember that every year their family took the best vacations.

During his retirement, Virgil continued to work his business, Larsen Tree Service. He and Betty traveled a lot and thoroughly enjoyed life and their family.

In 2004, Betty Jo and Virgil celebrated their 50th wedding anniversary. Later that year, Betty Jo was called home by our Lord.

In the fall of 2005, Virgil started a new adventure. He met his lovely Shirley on an online dating site. They were immediately attracted to each other and were married April 15, 2006. Virgil and Shirley traveled a lot and enjoyed spending their summers at Fort Smith in their summer home. Their children and their families loved to visit and spend quality time with them.

Virgil spent the last 18 months at Highgate Senior Living, and we want to thank them for their loving care, especially with the COVID challenges.

Virgil is survived by his loving wife, Shirley O’Connor and her family who love him dearly. Virgil’s children, Shirleen Larsen, Star Larsen (Terry), Troy Larsen (Patti), Arlon Larsen (Dianna) as well as his blended family which includes grandchildren, great grandchildren, three very special nieces and their families and all his cherished friends.

Virgil is predeceased by his mother and father, his brother LeRoy and his beloved first love, Betty Jo.

Celebration of life will be held Saturday, January 9, 2021 at 2:00 pm at Smith Funeral Chapel West.