To share your memory on the wall of Joseph Gustafson, sign in using one of the following options:

Print
Joseph Henry Gustafson was born on November 7, 1921, in Columbus, Montana to Bror and Hulda (Halloran) Gustafson. He passed away on November 22, 2020, at the Tender Nest in Laurel, Montana, where he had resided for a year.

Joe attended ... Read More
Joseph Henry Gustafson was born on November 7, 1921, in Columbus, Montana to Bror and Hulda (Halloran) Gustafson. He passed away on November 22, 2020, at the Tender Nest in Laurel, Montana, where he had resided for a year.

Joe attended Countryman Creek Rural school. He was an Army WWll Veteran, serving in North Africa and Sicily from 1942-1945. On August 14, 1958, he married Grace Davis and also gained a step-daughter, Dianne Humphreys. They later had two daughters, Sherry and JoDee. He worked many odd jobs, as well as having his own trucking business, hauling livestock, lumber for Timberweld, or whatever anyone needed. He also hauled fuel for his brother Johnny at the Conoco station in Columbus. He lived on the acreage north of Columbus on Sheep Dip Road where his parents and brother had lived before Joe was married. He raised hay, hogs, chickens, and sheep. He and Grace often raised a huge garden, selling garden vegetables, corn, and eggs to loyal customers. They put up and displayed a winter wonderland at Christmas time where cars would come in a steady line to look at all the lights. He enjoyed visiting with people and especially enjoyed going to the Senior Citizens Center in Columbus.

Those who preceded him in death are his parents, his wife Grace, his brother Johnny (Zilla), daughter JoDee, and his beloved dog Bandi.

A private graveside service and interment will be held at the Columbus Cemetery.
Read Less

We encourage you to share your most beloved memories of Joseph here, so that the family and other loved ones can always see it. You can upload cherished photographs, or share your favorite stories, and can even comment on those shared by others.

Plant a Tree in Memory of Joseph
Plant a tree 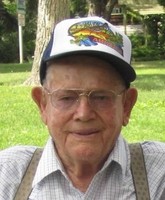