To share your memory on the wall of Lola Temme, sign in using one of the following options:

We encourage you to share your most beloved memories of Lola here, so that the family and other loved ones can always see it. You can upload cherished photographs, or share your favorite stories, and can even comment on those shared by others.

Posted Oct 15, 2020 at 06:59pm
to the Temmee family,
I am so very sorry about your mother passing. She used to call me to see if I had heard anything about home. I really appreciate asking me to come to her birthday. (I think it was her 95th.) I wanted to come to Trinity to go to her funeral, but I have such a time walking, and didn.t have anyone to go with me.
I go to Christ The King here in Billings, and we are getting a new church, so I am going to donate money to the building fund of CTK in Lola's name.
God's blessing to all of you
Irene Schultz Aure
620 Hillview Ln.
Billings, Mt. 59101
Comment Share
Share via:
AE 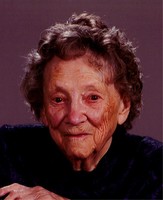