To share your memory on the wall of John Pearson, sign in using one of the following options:

John had 40 years of experience in the industrial pipe field. John’s personality allowed him to get along with everyone, stranger, and friend alike. His enjoyment came from his family, especially his children’s’ and grandchildren’s’ activities. He thoroughly enjoyed the Montana outdoors with his friends and family. His love of music led him to playing guitar in a Christian band.

John was preceded in death by his parents and his brother (Larry). He is survived by his wife Sharon, his two children John M. (Pam) and Tricia D. Korcheck (Kevin) and grandchildren John William Pearson and Jordan Nicole Pearson.

A graveside service will be held at 11:00 a.m. on Thursday, October 8, 2020 at Sunset Memorial Gardens. The family will receive friends at Smith Downtown Chapel, 925 S. 27th Street, from 12:00 to 3:00 following the graveside service. Condolences may be shared at www.smithfuneralchapels.com.
Read Less

We have provided a digital copy (PDF) of the Memorial Program that we supply at the time of the service. To Download this file please click the filename below.

Posted Oct 08, 2020 at 03:45pm
John, Pam and family. We're all thinking of you today. May God give you peace to help you through the loss of your Dad. Glenn, Barb and Joel Schreiner
Comment Share
Share via:
BL

Posted Oct 06, 2020 at 12:29pm
Dear Sharon and Family...I am so sorry to hear of John's passing...due to health issues I won't be able to attend any services...but my prayers and thoughts are with you and the rest of your family.... Sorrowfully, Betty and Gary Leppart
Comment Share
Share via:
M(

Posted Oct 06, 2020 at 09:38am
Dear Sharon, Johnny and Pam, and Tricia and families.... I am so sorry to hear about the loss of John... We just never know when it’s our turn to go to Heaven. Do take care of yourselves and GodBless each of you. Love (Jeff and Mark Richardson too)
Comment Share
Share via: 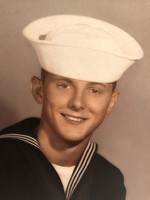