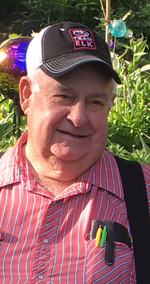 Edward "Eddie" F. Binstock, 79, passed away peacefully through heaven's gates on September 1, 2020 in Columbus, MT, from a combination of kidney failure and a recent diagnosis of bladder cancer. Cremation has taken place.
Eddie was the first born to Clement and Cecelia Binstock of South Heart, ND, on February 2, 1941. He was raised on the family farm/ranch in South Heart, ND, through 8th grade, at which time he took a job custom combining to help support his family. In May of 1962, he married the love of his life, Alice (Ficek). She was his best friend and soulmate for 58 years. Most of their married life was lived in "God’s Country" in the big sky of Montana.
Eddie persevered in the field of salesmanship over most of Montana. He started at Peavey Grain Elevators, Brockway, MT, and then was recruited to Columbus, MT, by GTA Grain Elevators. After several years of custom combining and selling grains/seeds, he changed his career to vehicle sales at Lethert Motor. A short time later his passion to remain in the farm and ranch industry returned. He became a John Deere and vehicle sales representative for Davey Motor Company, now known as Beartooth Ford. He absolutely enjoyed hobbies of fishing and hunting with his family and friends. He cherished his annual fishing trips to Besnard Lake in Canada (20+ years) for walleye and northern pike and to the Northwest Territory for lake trout. He also thoroughly enjoyed his Pinochle card parties in "Duffy's Tavern" with all of his buddies.
Eddie was preceded in death by his father Clement, mother Cecelia, step-mother Barb, and brother Ernest.
Survivors include his wife, Alice, daughters Laura (Jack) Bakich and Sonya (Robert) Blenkner, sons Chad (Hilary) Binstock, and Bob Binstock. He has had the joy of being "Grandpa Eddie" to his grandchildren Amanda (CJ) Harris, Spencer (Lauren) Bakich, Rebecca Blenkner, Patrick Blenkner, Rachelle (Darneail fiancé) Blenkner, Chloe Binstock, Emma Binstock, Treyson Binstock, Kyra Binstock and Cameron Swenson. His beloved great-grandchildren are Mae'zi (lil’ monkey) Harris and Jaxzi (turbo) Harris. Additional survivors include his siblings, Edie (Alvin) Kudrna, Patti Gelman, Karen (Bob) Kostelecky, Charlotte (Ken) Ridl, James (Julie) Binstock, and Francis (Gloria) Binstock.
Funeral Mass will be held at 10:00 am, Tuesday, September 8th, 2020, at St. Mary's Catholic Church, Columbus, MT, 59019, by Father Navil Rodrigues.
Memorials may be sent to Project Hope, Stillwater Billings Clinic, Beartooth Healthcare Community or a place of your choice.
The family would like to share a special thanks to Eddie's healthcare teams at Stillwater Billings Clinic, Beartooth Healthcare Community, and Billings Clinic.
We will stream the service on YouTube at this link https://youtu.be/VOtMT8JK1E0 and on the St. Mary’s Facebook page https://www.facebook.com/St-Marys-Parish-198067126895636. Also a link to a YouTube stream on St. Mary’s website at www.mystmary.com.