To share your memory on the wall of Dorothy Spaulding, sign in using one of the following options:

Dorothy was born in Sheffield, North Dakota to Leonard and Minnie (Ehrmantraut) Sticka. The family moved to Fromberg, Montana and... Read More
Dorothy E. (Sticka) Spaulding was born on March 29, 1931 and passed away August 31, 2020 at the age of 89.

Dorothy met the love of her life in Belfry, Sam Spaulding. They were married for 53 years before Sam’s passing in 2004. Sam and Dorothy had 4 children. They farmed and ranched in Belfry in addition to milking 25 cows morning and night. Many families in and around Belfry bought milk and eggs from them for years. Their doors were always open to visitors.

In addition to being the Belfry Cemetery Secretary she eventually took a job cooking at Belfry School. This was a true love of hers, feeding people her delicious cooking. She even started making all homemade bread and cinnamon rolls. The chili and cinnamon rolls at Belfry School have been the topic of many discussions.
Dorothy loved to cook, and she provided many meals and treats over the years. This is what people remember most about her. As a retirement project she took a summer job at the B4 and L-T Ranch near Cooke City, MT. This was a highlight for her and Sam. They were able to enjoy cool summer days and the beautiful scenery of the area.

One of Sam and Dorothy’s favorite activities was taking many picnics throughout the summer. One of their neighbors said Spaulding’s were the first ones to go on a picnic in the spring and the last one to go in the fall.
Dorothy is survived by her 4 children: Dean (Dena) Spaulding of Belfry and their 3 children Denise (Doug) Aisenbrey, Doug Spaulding, and Dustin (Angela) Spaulding; her son Jim (Debbie) Spaulding of Lakeside, MT and their 5 children Jennifer (Chris) Gendreau, Jamie Spaulding, Andrea Effertz, Bria Effertz, and Colter (Chrystal) Effertz; her daughter Shona Wieting of Billings, MT and her 2 children Matt Herden and Sammi (TyRay) Hageman; her daughter Jonni (Dan) Weisgerber of Kamuela, Hawaii and their 4 children Hans Sommerhoff, Maggi Sommerhoff, Charlotte Sommerhoff, and MacKenzie Weisgerber. She is survived by 10 great grandchildren and nieces and nephews. She is survived by her sister Kathy (Elvin) Kaufman.

She was preceded in death by her husband Sam, 3 brothers Adam, John, Arnie, and one sister Leona.
The rosary and vigil will begin at 6:15 p.m. on Thursday, September 3 at Sacred Heart Catholic Church in Bridger. Funeral Mass will be held at 10:30 a.m. on Friday, September 4 at Sacred Heart Catholic Church. Rite of Committal will be held at the Belfry Cemetery following Mass.

A luncheon follows at the Belfry School. Condolences may be shared at www.smithfuneralchapels.com.
Read Less

We encourage you to share your most beloved memories of Dorothy here, so that the family and other loved ones can always see it. You can upload cherished photographs, or share your favorite stories, and can even comment on those shared by others.

Posted Sep 16, 2020 at 09:34am
Please accept our most heartfelt sympathies for your loss... Our thoughts are with you and your family during this difficult time. 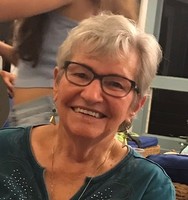