To share your memory on the wall of William Waite, sign in using one of the following options:

Bill was born on March 17, 1939 in Wibaux, Montana to Clarence and Ida Waite. Bill, his older sister Joan and his parents moved to Billings in 1946 and younger brother John soon joined the family. After graduating from Billings Senior High School in 1956, Bill did a stint in the United States Army.

Bill met his wife Sharon in 1957 and they married in 1958. With their son Mitch, they moved to California where Bill completed an automotive repair program at the National Technical School in Los Angeles. Another son and a daughter were born in California. The family moved back to Billings in 1965 and Bill began working in the shop at Frontier Chevrolet. A third son, Matt, was born after Bill and Sharon returned to Billings. Bill spent 40 years turning wrenches; tinkering on cars and going to car shows and swap meets were his favorite hobbies.

Bill enjoyed many things about Montana and had a lot of activities to fill his time. He enjoyed camping in the Beartooth Mountains, shooting, and hunting as well as riding ATVs and snowmobiles. It was a rare weekend when he wasn’t out enjoying one pastime or another.

Bill is preceded in death by his wife Sharon, sister Joan and brother John, and his parents. He is survived by his children Mitch, Mark, Brenda and Matt (Tami) and his grandchildren Nathan and Bethany.

At Bill's request, there will be a private interment for Bill and Sharon. Friends and family are invited to share their memories of Bill at smithfuneralchapels.com.
Read Less

There are no events scheduled. You can still show your support by sending flowers directly to the family, or planting a memorial tree in memory of William "Bill" Waite.
Plant a Tree

Posted Jul 25, 2020 at 09:36am
Matt, Sorry to hear of your dads passing. Hugs and prayers being sent to you and your family. Joyce Sheldon (your former RETEC roommate)
Comment Share
Share via:
MW

Joyce, thanks for the note, and good to hear from you. Hope you are doing well...Matt
LL

Posted Jul 24, 2020 at 11:15pm
My name is Leonard Letwak and I grew up with Elsworth (Bill) I used to call him by his middle name. We used to deliver papers together. I broke my arm and he folded the papers for me after my motorcycle accident. I can remember we used to go joy riding in his Dad's 53 Mercury. We were best friends. We spent a lot of time at each others houses playing with our train sets. We used to race stock cars at the racetrack. I went to LA with him and went to school with him. He was the smartest one in the class. He was 2 years older than me. I was too young to drink so he loaned me his ID so I could drink with him. After we graduated, I left LA and he stayed. I went back to Billings for a short time then moved to Denver. I think about him a lot and was hoping we could get in touch again. For some stupid reason I never did and now I really regret it!! The only reason I knew he passed was my brother Dick, in Calif., gets the Billings Newspaper. I have some old pictures somewhere. I will try to find them and post them.
I am so sorry for your loss. My thoughts and prayers are with you all. He will be sorely missed. Rest in peace buddy.
If you have some recent pictures of him I would love to see them. You can email them to me. theletwaks@yahoo.com
Comment Share
Share via:
LC

Posted Jul 24, 2020 at 09:44am
Bill was my brother-in-law for many decades -- , a great mechanic, an avid hunter and a kind man who was devoted to his family. He'll always be young in my memory, barely 19 when I met him.
Comment Share
Share via:
DB

Posted Jul 23, 2020 at 11:07am
Your Dad was always a very quiet person, but got the privilege of getting to know him thru his love of hunting out at our ranch. A surprise visit at our house on occasion was always enjoyed. He was a person that just made the world a better place. Always proud to call him 'a friend'. So sorry for your loss. Bob and Darlene Broderson
Comment Share
Share via:
MW

Dob & Darlene, thanks for the thoughts. Some of my favorite memories with Dad are hunting on your place. I know he also enjoyed working with Bob at Frontier. Thanks again for the note, take care. Matt & Family 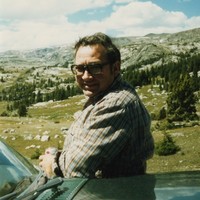