To share your memory on the wall of Arthur Evans, sign in using one of the following options:

We encourage you to share your most beloved memories of Arthur here, so that the family and other loved ones can always see it. You can upload cherished photographs, or share your favorite stories, and can even comment on those shared by others.

Posted Jul 24, 2020 at 08:15pm
I'll always rember the fishing trips, family get togethers at Grandma & Grandpa Evans' . Those were the Good Ole Days! May God Bless Your Family.

3 trees were planted in the memory of Arthur Evans

Posted Jul 26, 2020 at 05:47pm
With deepest sympathy, from the girls at First Interstate Bank of Absarokee.

Posted Jul 20, 2020 at 01:10am
I grew up with Art and Shirley as my neighbors in Brighton, CO, but they were so much more than that to me and my family. In our little neighborhood we all quickly became family and I loved all of our gatherings. We haven't been together in years but that is what I still think of when I think of home. I will miss you Art. May you rest in peace. May god wrap his arms around Shirley and his girls and all of his family during this difficult time. Love to you all. Dalia (McClure) Parrish
Comment Share
Share via:
MM

Posted Jul 19, 2020 at 06:15pm
Thinking of you and your family during this difficult time. Remembering all the good times we had in Colorado. 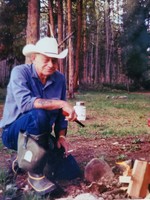