To share your memory on the wall of Mary Teresin, sign in using one of the following options:

Print
Mary J. Teresin 87, passed away June 28 after a lengthy illness at Park View Nursing Care Center in Billings, Montana. Her wishes were to be cremated and her ashes to be scattered at the Nemec Family Farm near Lewistown, Montana.

Mary ... Read More
Mary J. Teresin 87, passed away June 28 after a lengthy illness at Park View Nursing Care Center in Billings, Montana. Her wishes were to be cremated and her ashes to be scattered at the Nemec Family Farm near Lewistown, Montana.

Mary was born January 16, 1933, the youngest daughter of Joseph F. and Frances F. Nemec in Lewistown, Montana hospital. She completed eighth grade education in the country school on Cottonwood Creek and about three years of high school at Fergus County High School in Lewistown, Montana. She moved to Lemon Grove, California and graduated from Grossmont High School in La Mesa, California in 1951.

In 1952, she joined the U.S. Army during the Korean War as a member of the Women's Army Corps. While serving, she received the National Defense Service Medal and the Army Overseas Service Ribbon. Her name and service is engraved at the National Women's Military Service Memorial in Washington D.C.

In February 1955, Mary married Norman Oswalt in Yuma, Arizona. While Norman was in the U.S. Navy and stationed at Pearl Harbor, they moved to Honolulu, Hawaii. At the end of her husband's tour, they moved back to San Diego, California where she worked for eight years. In 1965, she divorced Norman and later moved to Anchorage, Alaska where she worked for the
U.S. Government in the Defense Contract Audit Agency.

In 1969, she married Martin Teresin. She helped her husband with a commercial fishing venture and worked for the City of Anchorage. Their marriage ended in 1972. In spring of 1972, she went to work for the Alyeska Pipeline Service Company for seven and a half years. In 1981, she left Alaska and moved to Flagstaff, Arizona. Her career changed to the hospitality industry in 1986 as a night auditor retiring in October 1999.

After retirement, she moved to Roundup, Montana after nearly 46 years in the business world. In May 2006, she moved to the Magic City Terrace Independent Living facility in Billings, Montana. After some physical and challenging health issues, she eventually moved to Park View Nursing Care Center in 2019.

There are no events scheduled. You can still show your support by sending flowers directly to the family, or planting a memorial tree in memory of Mary Julia Teresin (Nemec).
Plant a Tree

Plant a Tree in Memory of Mary
Plant a tree 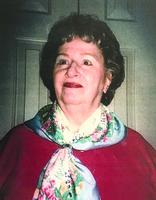