To share your memory on the wall of Thomas Bailey, sign in using one of the following options:

Tom was born on June 6, 1921 in Red Lodge, Montana, to Thomas Harold Bailey and Olive Mary Dinsdale Bailey. In 1939 he graduated from the Montana School for the Deaf and Blind in Great Falls. On August 4, 1945, he married Margaret (Peggy) Normile and together they raised two children, Jean Olive Bailey Dunning and Thomas W. Bailey.

Tom felt most at home in the great outdoors. He loved fishing in the Cody Reservoir, exploring Yellowstone National Park and skiing the great Montana mountains. He owned his house in Red Lodge for 70 years and delighted in remodeling projects. He enjoyed a strong whiskey and Pepsi, and would say, “the higher the proof the better the whiskey.” He had a huge passion for building and running electric model trains and often frequented yard sales throughout Red Lodge to find more treasures. Tom worked as a professional baker in Cody, Hardin, Bozeman, and Billings before finally retiring from the City Bakery in Red Lodge in 1985. He was liked by all who met him; known for his happy go lucky attitude, his infectious smile, and his kind and compassionate spirit.

Tom is preceded in death by his father, Thomas, and his mother, Olive. Additionally, by his sister Lucy Jane Bailey Penttila, by his wife Margaret (Peggy) Normile, his son Thomas W. Bailey and first grandson Robert Whittmyer.

A celebration service will be announced later by the family. www.smithfuneralchapels.com
Read Less

Plant a Tree in Memory of Thomas
Plant a tree 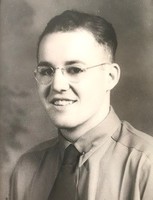