To share your memory on the wall of Janet Helbert, sign in using one of the following options:

Print
Janet Marie Helbert passed away on June 18, 2020 surrounded by her family on a
quiet Montana morning, following months of struggle with pancreatic cancer.

Janet was born on May 5, 1941 in Ashland, Ohio as the youngest of 4 children... Read More
Janet Marie Helbert passed away on June 18, 2020 surrounded by her family on a
quiet Montana morning, following months of struggle with pancreatic cancer.

Janet was born on May 5, 1941 in Ashland, Ohio as the youngest of 4 children to John
and Wavelene Strang. She and her siblings were cast with strong wills and work ethics
being raised on their family’s dairy farm. She graduated as valedictorian of her class
at Hayesville High School in 1959.

Janet graduated from Ashland University in 1963 with a degree in education. She
immediately began her career teaching math at Edgewood Junior High in Wooster,
Ohio and continued there until 1977.

On June 26, 1964 she married Thomas Helbert, whom she had known since the first
day of the first grade, and they spent the following 56 years by each others’ side. Their
family grew with the arrival of Heidi Mae and Jess Ira which allowed Janet to lovingly
embrace motherhood. Fuzz and Wimp were blessed with the best of their mom every
day, and they are forever grateful. From birthday cakes and homemade ice cream to
sun-filled days in the swimming pool, hot cocoa after sledding parties, and nightly
verses of The Owl and the Pussy Cat, she made each day of a country childhood
special.

Janet later served as Vermillion township clerk for 12 years before concluding her
career teaching math at Ashland-West Holmes Career Center from 1990 until she
retired in 1998. She was a longtime member of the Hayesville United Methodist
Church, an avid euchre player in her time in Ohio with friends and family, and she and
Tom were well known for their success at local turkey shoots.

Never one to let someone go hungry, Janet shared her passion of delicious country
meals and fabulous pies at every opportunity, and her grandchildren always had plenty
of fresh baked cookies to enjoy. Soup dinners in the wintertime were also treasured
times for family and friends.

Numerous family trips to Montana led to Tom and Janet’s retirement to the mountains
near Nye where they built their cabin home. Some of her most appreciated moments
were in taking in the views of the mountains and the Stillwater river from her home
while sitting on her deck in the company of hummingbirds and chipmunks amidst her
garden and flowers.

Janet was thankful for her faith community at the Nye Community Church and loved
her time with all of her card playing friends in Montana as well.
Our family was honored to be able to care for Janet during her time with cancer. We
are tremendously thankful for the people of Riverstone Hospice, especially nurses
Heidi and Kathy, for their help and compassion.

Janet is survived by her husband Tom; children Heidi and Jess with their spouses
Penny and Tim; and grandchildren Justin, Jaylin, Henry and Luke. Beloved family in
Ohio includes dear sisters Carol Garling and Eleanor (John) Leininger, brother-in-law
Bill (Sharlene) Helbert, sister-in-law Shirley Helbert and many nieces and nephews on
both sides of the family.

Funeral service will be Thursday, June 25th at Nye Community Church at 4pm with
burial at the Nye Cemetery. Calling hours and visitation with the family at the church
will be held on the evening of Wednesday, June 24th from 6-8pm.

If you cannot attend the Funeral Service in person but would like to attend virtually it will be live streamed on the Nye Community Church Facebook page.

In lieu of flowers, Janet requested memorial contributions be directed in support of the
Montana Association for the Blind, PO Box 465, Helena, MT 59624.
Read Less

We encourage you to share your most beloved memories of Janet here, so that the family and other loved ones can always see it. You can upload cherished photographs, or share your favorite stories, and can even comment on those shared by others.

Plant a Tree in Memory of Janet
Plant a tree 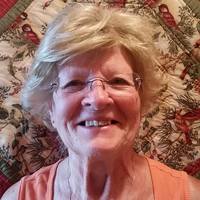