To share your memory on the wall of Marjorie White, sign in using one of the following options:

Provide comfort for the family of Marjorie White with a meaningful gesture of sympathy.

She was a loving and caring mother who taught and showed her children what love, hard work and determination l... Read More
Marjorie Ruth White (Klebenow)(Stebbins), born May 24, 1943, in Madison, Wisconsin, passed away May 6, 2020, at the age of 76.

She was a loving and caring mother who taught and showed her children what love, hard work and determination looked like. She was an excellent competitive swimmer, passing on her love of swimming and the water to her kids. She and her first husband, Charlie Klebenow, moved to Montana in 1968. There daughter Annie was born in 1968, followed by Richard a year later and Jenny in 1972. She was a homemaker the majority of her life.

One of the life experiences she gave her kids was in 1978 when the family hiked into the Bob Marshall Wilderness for two weeks. Outfitted with a crazy run away horse to carry their supplies and the family dog King, the adventure began with Annie-9, Richard-8, and Jenny-6. The memories remembered with a chuckle is the horse trying to return home almost every night, Mom sewing a bread sack over Jenny’s shoe after it almost went up in smoke from all the rain, the fishing, fireside stories, and being introduced to freeze-dried ice cream.

The family moved to Condon in 1979, where they lived without running water and electricity, and Mom cooking and baking the best meals on a wood cook stove. She had so much love for her kids and their friends, always opening her arms to those that needed her love and a warm hug.

She went back to school in her 40’s getting her degree as a Respiratory Therapist. That career took her to Butte, St. Patrick Hospital in Missoula with a few life flight trips, Saudi Arabia, and Havre. She married Ken Stebbins in June 1994. Their life together gave her the opportunity to live 7 yrs on their 43-foot Defever trawler Whiskers with sheep dog Puffin and cat Shadow. They cruised up and down the East Coast, into the Great Lakes and down the Mississippi, across Florida to the Gulf, and spent many months anchored in Key West. There her family visited every year creating more life memories, laughing and making Key West a big part of all our lives. She persevered through years of health issues, with the biggest one being her fight with Stage 4 Mantle Cell Lymphoma. Guaranteed to come back, it never did.

She moved to Laurel Health and Rehab Center where it became very apparent that she was a favorite to everyone. The love shown by the staff there on their

feelings for mom was very heartwarming. She was known to throw out a few F bombs and her feisty nature and “blurts” always made for a good laugh.

Adoption played a bigger part in Mom’s life than she ever would have thought. Becoming pregnant at a young age, Mom made the selfless decision to put her unborn child up for adoption. In September of 2018, Mom’s dream of being reunited with that child took place. Paul with his wife Patty flew to Montana to meet her. The instant connection and love that took place during this visit was unimaginable. In addition, through adoption, she became Grammy to her granddaughter Edie.

Mom is preceded in death by her parents, Charles and Marjorie White, brother Fred White, and her Whiskers captain Ken Stebbins.

Mama, we love you and will miss you! Thank you for everything you have given us!
Read Less

Print
no services are planned

We encourage you to share your most beloved memories of Marjorie here, so that the family and other loved ones can always see it. You can upload cherished photographs, or share your favorite stories, and can even comment on those shared by others.

Posted May 15, 2020 at 11:54pm
My mom went to college w Margie's dad & our family relationship continued in Montana where we both lived. Very fond memories of her and her family.

Steve and Donna Slater and family 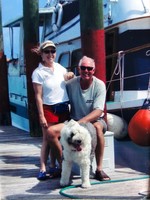