To share your memory on the wall of Mary Gainer, sign in using one of the following options:

Mary Louise was born on August 14, 1925 to John Wesley and Hattie Marie (Sturm) Nestor, Sr. in rural Barbour County, West Virginia. She was one of eight children. Mary Louise attended the Kasson School where she graduated from High School in 1943. She was valedictorian and also played basketball.

High School was where she met the love of her life, Cecil Dale Gainer. They were married on August 12, 1944 in Oakland, Maryland two days before her nineteenth birthday. They were together for over 75 years until Dale’s passing on Dec.29, 2019. They were only apart for two months and one day.

A son, Daniel Dale, was added to the family in 1948. Mary Louise was a homemaker that prided herself on a spotless home and a well-fed family. She also loved to crochet, sew and do other crafts. She was active in her church community wherever they lived. Mary Louise had a well-earned title of “prayer warrior”.

Mary Louise was small but mighty. She was sweet and caring, always ready to help others. She also could be feisty and maybe a bit stubborn. We loved her and she will be missed.

We want to thank the caregivers at the Willows who looked after Mom these last few months as Alzheimer’s took its toll.

Posted Mar 07, 2020 at 03:18pm
TRIBUTE TO MARY LOUISE
I have known Mary Louise Gainer since 1993
What a blessing she has been to me
She took Tom and me into her fold
And always enjoyed the stories we told

One night in particular they were in the audience with Tom who watched in horror!
As I performed a Slavic line dance, when my skirt got lower and lower and finally fell to the floor!
They, on the other hand, laughed in delight
Which made us realize their sense of humor so bright!

They were gracious hosts, always offering us a bed
Mary Louise never let us walk away without being well fed
To stay above the funeral home was quite a unique claim
Just getting up and down those stairs made us up our game

I remember the days they walked all over town
They were more spry at their ripe age than I would ever know!
We were fans together at local sporting events, for all the kids rooting
We took drives together to enjoy the majestic beauty

Mary Louise and Cecil were so good to Tom, not only giving him room and board
But sharing their love and commitment together for the Lord
One of Tom’s favorite pastimes with Mary Louise was singing hymns
His time with them both enriched him to the brim

Mary Louise was the most giving person I knew
I will miss her dearly, but what I know to be true
She always went out of her way to please us
Now she abides gloriously at home with Cecil and Jesus

With love from Barb Alt 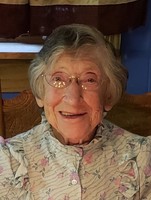 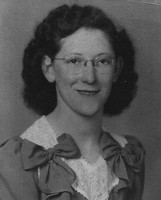 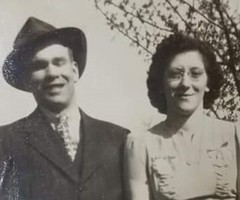 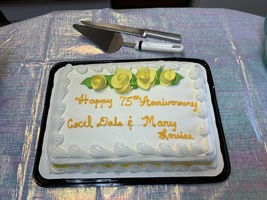