To share your memory on the wall of Charles Martin, sign in using one of the following options:

Print
On February 15, 2020 Charles (Chuck) Lewis Martin did not awaken from his restful sleep.

Chuck was born on December 1, 1928 to David and Aila Martin in Cody, Wyoming. He was the oldest of three boys, being joined by younger brothers Mike... Read More
On February 15, 2020 Charles (Chuck) Lewis Martin did not awaken from his restful sleep.

Chuck was born on December 1, 1928 to David and Aila Martin in Cody, Wyoming. He was the oldest of three boys, being joined by younger brothers Mike and David (Bill) jr. The family moved to Red Lodge where Chuck lived the rest of his life.

Chuck's life was changed forever when at the age of seven his father suddenly died and left his mother to raise 3 young boys.

Even though he was not schooled beyond the eighth grade, Chuck found his own schooling in working odd jobs all around the Red Lodge and Cooke City areas.

Chuck was drafted by the Army in 1950 and served time in Korea as a mortar sergeant for the 223rd Infantry.
Chuck and S. Marlene Warila were married on March 16, 1951.

After returning home from the Army he worked helping build the Beartooth Pass, at the Brophy Coal Mine, for Royal's Repair as a mechanic and at Beartooth Electric as a lineman.

Chuck was an avid hunter, fisherman, snowmobile enthusiast and had a great love of homemade foods, desserts and good whiskey! He was a member of the Red Lodge Snow Goers, a Red Lodge Volunteer Fireman and a member of The American Legion for 68 years.

He was preceded in death by his parents, his brother Mike, wife Marlene and grandson Lane Lewis Martin.
He is survived by his daughter Debbie (Bill) Harrison of Bozeman, MT; his son Rick (Dawn) Martin of Red Lodge, MT; Granddaughter Becky Martin of Largo, Florida; Brother David (Joyce) Martin of Deer Lodge, MT and Sister-In-Law Elsie Martin of Red Lodge.

Services will be held at a later date this Summer.
Read Less

We encourage you to share your most beloved memories of Charles here, so that the family and other loved ones can always see it. You can upload cherished photographs, or share your favorite stories, and can even comment on those shared by others.

Plant a Tree in Memory of Charles
Plant a tree 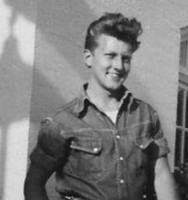