To share your memory on the wall of Margaret Marilyn Wade, sign in using one of the following options:

Marilyn was an excellent student and graduated from Billings Senior High. She was the first in her family to graduate from college and earned a degree in education from Eastern Montana College, now Montana State University-Billings. While working summers in Cooke City, Montana, Marilyn met Gene Wade. As she tells it, Gene was very persistent in asking her out. She eventually said yes; they fell in love and married. Marilyn worked as a teacher in Billings. They had two children Anne-Marie and Brian. Once the kids went to school, Marilyn resumed teaching. Her fondest years were spent at Alkali Creek Elementary teaching sixth grade, which was her favorite grade. She was known for her love of teaching social studies. She taught a special unit on Australia where all the kids made a salt and flour map of Australian geography. She also loved teaching ancient Egypt and Roman history complete with a Toga day at the end of the unit. She required all her students to know the capitals of every country, all states and Canadian provinces along with major rivers and mountain ranges. Marilyn also enjoyed her years at Ponderosa Elementary and finished her career at Castle Rock.

After retiring, Marilyn became an active volunteer at the Western Heritage Center and took on her favorite job of being a grandma to her four grandchildren. She took great joy when Margot was born on March 1st, her birthday, and was named after her. Marilyn was an avid reader, who loved mysteries. She faithfully attended her neighborhood book club for the last 19 years and enjoyed the lively conversations. She will also miss her exercise friends at Circuits.

Marilyn was first and foremost kind. She always made sure that everyone was treated fairly and rarely said a bad word about anybody. She was fond of paraphrasing Thumper from Bambi, “if you can’t say anything nice, don’t say anything at all.” Marilyn sent cards or postcards for every holiday, even the minor ones, to her grandkids, nieces and nephews. She also wrote weekly notes to sick or elderly friends and relatives to boost their spirits. Since her death, many have commented on how much these weekly notes meant to them or their loved ones.

She valued education and history, which she loved to put to work playing trivia. She and Gene travelled the world together. They liked to laugh about how they were the only tourists to spend ten days in Rome visiting archeological sites, visit the basement of the Vatican parking garage to view tombs, and not see the Vatican. Other favorite trips included the history of Scotland and Ireland with the Tigges family. Of course, they also loved visiting family in Australia. Anne-Marie and Brian used to make fun of their parents, saying that it was a good thing they found each other because no one else wanted to study the rocks of Montana, look for the wagon wheel tracks on the original Bozeman Trail or walk in the wagon ruts along the Oregon Trail. Now they are sorry they weren’t paying closer attention.

Marilyn was an avid football fan and the Green Bay Packers were her team. She always insisted the “Pack was Back,” and was lucky enough to attend a game at Lambeau Field. She was also a fan of women’s college basketball and enjoyed watching the tournaments at Metra Park.

Two and a half years ago, Marilyn received her cancer diagnosis. Unfortunately, not all cancers can be fought. Some can only be resisted, which she did with steady resolve. She faced all the challenges and indignities the disease wrought without ever complaining. In the end, we marveled at her quiet strength. We want to say thank you to the health aides of Synergy who took good care of her, especially Donna, Tessa and Bonnie.

We encourage you to share your most beloved memories of Margaret Marilyn here, so that the family and other loved ones can always see it. You can upload cherished photographs, or share your favorite stories, and can even comment on those shared by others.

Flowers were purchased for the family of Margaret Marilyn Wade.

Posted Feb 20, 2020 at 05:06pm
With our deepest love and sympathy for the Wades, Stoddarts, and kin, and in immense gratitude for having gotten to know and love Marilyn.

Erwin Byrd and Dave, Harry and Annie Sims purchased the Love Everlasting Bouquet for the family of Margaret Marilyn Wade.

Posted Feb 16, 2020 at 04:45pm
Please accept our heartfelt sympathies. Our thoughts are with you and your family during this difficult time. We wish you peace and comfort.

Posted Feb 11, 2020 at 02:20pm
I first met Marilyn at Alkali Elementary school during my sophomore practicum. She was warm, welcoming and supportive. My time in her sixth grade classroom lasted only a few weeks, but we reconnected during a workshop for teachers. We partnered up and I found that Marilyn had a love of words similar to my own. I would see her occasionally when I worked at Gainan’s in the Heights. She would bring in her three brass pots for us to fill with flowers for Thanksgiving and Christmas. I regret not staying in touch with this wonderful woman in whom I had found a kindred spirit.
Traci Zimmerman
Comment Share
Share via:
RE

Posted Feb 08, 2020 at 07:36pm
Marilyn was as she was described in her obituary, and so much more. I always admired her quiet kindness, and I will never forget her remarkable smile. 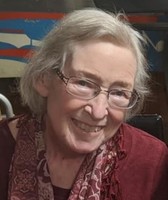