To share your memory on the wall of David Schmalz, sign in using one of the following options:

Provide comfort for the family of David Schmalz with a meaningful gesture of sympathy.

David was born to Chris and Irene Schmalz in Dickinson, ND. He grew up in Killdeer, ND on the family farm. He was married on March 24, 1973 to Barbara Kay Holwegner in Fromberg at the Catholic Church. He had five children Jeffery Schmalz of Red Lodge, Tamara Schmalz-Greeling of Worden, Brian Schmalz of Laramie, WY, Kevin Schmalz of Billings, and Sheila Schmalz of Ballantine.

David was a union ironworker and an AWS (American Welding Society) CWI (Certified Welding Inspector). He made many life-long friends through the ironworkers union. After retiring, he bought a farm in Ballantine where he enjoyed farming grass alfalfa hay and raising cattle. He always enjoyed working with his neighbors and fellow farmers and ranchers. He also loved his children and grandchildren and enjoyed spending time with them throughout the years. David was always kind and giving always helping, and lending a hand to his family, friends, and anyone in need.

He was preceded in death by parents Christian and Irene Schmalz; and brother-in-law James Holwegner.

Posted Feb 04, 2020 at 08:43pm
Our condolences are with you and your family during this difficult time.

Posted Jan 30, 2020 at 01:19pm
We were saddened to hear of the sudden passing of Dave, he was a kind man who always thought of others before himself. Sincere thoughts and prayers go out to Barb and the rest of his family as well as all of my cousins and their families. 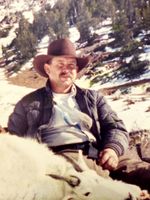