To share your memory on the wall of Eldon Sims, sign in using one of the following options:

In the early 70’s, Eldon served in the U.S. Navy as an aircraft mechanic and received the National Defense Service Medal.

We encourage you to share your most beloved memories of Eldon here, so that the family and other loved ones can always see it. You can upload cherished photographs, or share your favorite stories, and can even comment on those shared by others.

Posted Jan 28, 2020 at 08:38pm
Eldon my dear friend I will miss you and our jobs that we did together we had a lot of fun we even named each other Steve. You always made the job more fun. Rest in peace, until we meet again.
Comment Share
Share via: 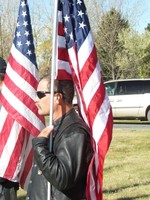