To share your memory on the wall of Kenneth Whistler, sign in using one of the following options:

Provide comfort for the family of Kenneth Whistler with a meaningful gesture of sympathy.

Ken was generous and warm. He was a passionate educator. He cared deeply for his family and community.

Ken was generous and warm. He was a passionate educator. He cared deeply for his family and community.

Ken and Theresa Whistler shared thirty years of marriage. Ken loved Theresa (and she loved him). She, he said, saved and enriched his life. They made and shared a life worth living.

In their life together, he and Theresa raised three children: Beau Hodai, Rowan Whistler, and Pearl Whistler.

In May 2016, they realized their dream of permanently moving to Red Lodge.

Ken was born to William and Gloria Whistler in Syracuse, New York, in September 1953. He was one of seven brothers and sisters: Jan, Bill, Tom, Jim, Virginia (deceased), and Mike.

He earned bachelor’s degrees in communications and electrical engineering from Syracuse University.

Ken was awarded three patents through the course of his twenty-one years as a network engineer at Verizon Wireless.

Aside from many other fine attributes, Ken had webbed toes—a condition known as “zyglodaci” (don’t Google it). He was proud of this (though he would never take his socks off).

His feet and hands were in constant motion—creating, fidgeting, gesturing. He also played the guitar.

Though Ken once said he believed he had no imagination, anyone who knew him knew that to be untrue.

I especially enjoyed talking with Ken. Conversations were evolutions—one thought growing into another, rolling explorations—down interesting roads, light and dark.

The man and the conversations were often a surprise.

Though he saw challenges and uncertainty in the world, he was generous in his hopes—for people and for the future.

He was generous with his time and his efforts as well. He genuinely cared.

He also had a good sense of humor. It was great sharing a laugh with him.

In the balance, Ken was a solidly good person.

I will miss him.

Dad was always so generous with his time and his wisdom. Sometimes too generous, as his attempts at teaching math and music theory were too high-brow for me. But thanks to years of free lessons while he drove me around, I had such a huge advantage in learning to drive a car that the instructor couldn’t believe I hadn’t done it before.

He could always relate to art in very interesting ways. He would say things about a film or a work of art that would both teach me huge words and also how the works could relate to the common human experience outside of academia. Film school taught me how to make a project technically sound, but dad definitely taught me more about how to actually connect to people, which is the whole reason I wanted to be an artist in the first place.

My dad was also generous with his gifts, including helping me with living necessities and going out of his way to get me experiences that might benefit my career. I believe he had a philosophy of generosity because he wanted to ensure that his benefits to this world would continue after he left and his strategy was to plant as many seeds of possibility as fast as he could.

I’m definitely not going to be an engineer like he was, but I try to keep the other good parts of his personality alive in mine. Thanks dad!

My dad always fostered my love for imaginary worlds and let me know that the imagination can take you great places in the real world. He would always read to me, Harry Potter, Harriet the Spy, Little Golden Books, opening my mind and expanding my horizons.

When the love of reading he fostered in me lead to my start as a teacher, he let me know just how proud he was. He loved hearing stories about my kindergartners, and what the school world had in for me. He was the first person to be in my classroom, we saw it for the first time together; he was one of my biggest supporters when starting my adult life.

I am deeply saddened that he won’t be there to see what the rest of my life holds, but I hope I can continue to make him proud.

I will always remember his kind heart, his warm spirit, his goofy humor, and just how much he loved his family, friends, and community.

I asked Ken one day what age he felt he was and he replied “14.” He said he had everything he needed from the time he was 14.

After much processing, I realized that he chose to keep his mind at the excited level of a 14-year-old Tom Swift… Ken had the tech, science and mechanical knowledge AND the sense of wonder and adventure that could be found using that knowledge.

He wanted to inspire everyone to feel that same excitement, so Mr. Ken did set out in Red Lodge to ignite many more Tom (or Tina) Swifts.

Boy, are we going to miss our Hero! He was the best three-quarters of me, and my full heart.

14 years
always on stage
arms waving
round face
deep dimples
badly behaving hair
eager to share
passionate about anything programmable or consuming energy
transmission is bits, bytes and constant
caring and kind
loved by all
Ken

Please come share your memories, photos, projects, and our company.

Ken may be best memorialized by donating to the STEAM Center: https://www.herossteamengine.com
Read Less

Posted Jan 24, 2020 at 01:05pm
Theresa and family. Our hearts and thoughts go out to you. We are pleased to plant these trees in his memory Love uncle Frank and family

Posted Jan 24, 2020 at 11:54am
I have only good memories of Ken. He and my sister Theresa were so in love, always hugging, joking and laughing together. Their partnership inspired me to find a love like that too. Ken was completely generous. He and Theresa always offered their home to us to stay and made us feel loved and welcome. I will always remember Ken with a smile on his youthful, dimpled face and a kind word of encouragement for everyone. We will miss visiting with him. Love, Anne Moran
Comment Share
Share via:
BW

He was my brother. I have 4 brothers and I’m sure I’m not offending any of them by saying I was closest to him and I will miss him terribly much.

He was a very intelligent man with a unique mind--Whenever we talked he would tell the most interesting arcane stories from when were young; things I didn’t remember or remembered completely differently; he always cracked me up and the story telling would go on for hours.

He was kind and open-hearted--We would share our feelings and thoughts freely; he was always open to my crazy ideas and “passionate” beliefs. Unlike most, he listened, he didn’t make wrong or answer “yeah, but” to whatever I was going on about.

He was an optimist and believed that the future could always be better--As a result of a common desire to tinker and improve, the two of us were always cooking up projects and plans from when we were little (like a home-made hot air balloon that never got off the ground) right up until this week; I was bringing drawings to show him for an “invention” we were going to craft on his 3-D printer…

He was fun to be with and very giving—I will never forget our week long trip in a big rented truck moving his furniture from NJ to Billings; crazy adventures every day with unplanned spontaneous side trips to the Corn Palace and the USAF museum. The real memories are from the long hours together driving and talking about everything from “cabbages and kings”. We made memories together too personal and too fleeting to share—You know what they say, “What happens in the U-Haul, stays in the U-Haul”.

I have no more words—Ken is only guy I’ve known for 66 + years and from now on will be only beautiful memories. I will miss him so, so very much. 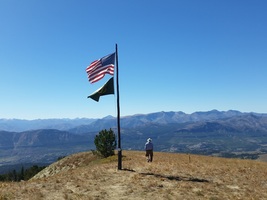