To share your memory on the wall of Mary Ringer, sign in using one of the following options:

When Judd died in 1990, Mary moved out to Red Lodge permanently the following year. Here she was in her element. She had a passion for life and the natural world around her. She was an avid hiker and skier, ever exploring Red Lodge and it's environ with family and friends. She was an accomplished fly fisher and relished a breakfast of rainbow trout caught from the creek minutes before. A skilled and adventurous cook, she loved sharing new recipes with family and friends. She loved gardening and knew all the wild flowers and mushrooms around Red Lodge and on the Beartooth Pass. A true naturalist.

An artist all of her life, she excelled in Watercolor and Oil painting. Early on, she became involved with The Carbon County Arts Guild and was on the board in several capacities up until her death. She had an enquiring mind and mastered many other creative endeavors including, sculpture, wood carving, and basket making. She could do anything she put her mind to.

Her family was her anchor. She instigated countless family gatherings, summoning her children from near and far. Seeing them all come together was her greatest joy. Infinitely strong and independent, she was an inspiration in her determination and positive thinking. She will be remembered for her feisty strength of character, innate creativity, a never ending enthusiasm for all of life's mysteries and an incredible will to live. And, for never missing her ritual evening Scotch! RIP Mother Mary.

The family would like to extend a special thanks to Denise Rivette for her care and dedication for the last 3 1/2 years. Thanks also to Drs. Bill George and Greg Burfeind and the staff at Beartooth Billings Clinic, Homecare and Hospice for their thoughtful, loving care.

A Celebration of Life will be held at Old Piney Dell at Rock Creek Resort, on Sunday, January 26, from 2-4 pm. Gifts in memory of Mary can be made to the Carbon County Arts Guild, The Yellowstone Wildlife Sanctuary and the Nature Conservancy of Montana.
Read Less

To plant a memorial tree in honor of Mary Ringer, please visit our Heartfelt Sympathies Store.

Posted Feb 19, 2020 at 11:03am
What special idea to plant a tree. It is something living that will continue to grow with Mary's spirit 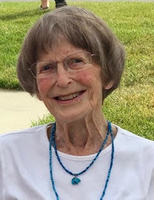