To share your memory on the wall of Jo Gonzales, sign in using one of the following options:

Provide comfort for the family of Jo Gonzales with a meaningful gesture of sympathy.

We encourage you to share your most beloved memories of Jo here, so that the family and other loved ones can always see it. You can upload cherished photographs, or share your favorite stories, and can even comment on those shared by others.

Posted Jan 14, 2020 at 03:54pm
I worked with Jo and Dick at the Forsyth Anthony's store. I was a mere 18 years old and learned a lot about life, love and fun times.
She was an amazing teacher and friend. Thinking of the family at this time.
Roberta Thiesen Ginalias
Comment Share
Share via:
L

Posted Jan 14, 2020 at 02:24pm
We Love Jo and we remember her.She was part of our family and lives in our hearts in our memory. Jo always received us with open arms she was very nice and attentive and made us laugh a lot. We ask the Lord to grant her the Eternal Rest and may her to Rest in Peace.
We accompany the family in their feelings. Laura & Mike Race
Comment Share
Share via:
E

Posted Jan 14, 2020 at 01:14pm
I'm so sorry to learn of Jo's passing. She was a very good friend of mine while we lived in Bridger all those years ago but had lost contact after we moved to Billings. Please know that I am thinking of you and your families during this most difficult time. It's really hard to say "good-bye" to a mom. I'm in Yuma, AZ for the winter so unable to come to the services. Just know that I'll be thinking of you.
Evagene Emmett (formerly Stief)
Comment Share
Share via:
SR

Posted Jan 13, 2020 at 05:46pm
I remember Jo from my time growing up in Bridger. She stands out in my mind for her smile and good humor. My sympathies and my prayers go out to all the family. Sue Temple Riehl
Comment Share
Share via: 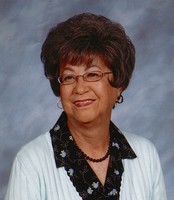