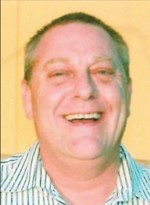 Jeffrey Charles “Jeff” Burdette, 54, of Billings, passed away unexpectedly on Oct. 22, 2019 in Billings, Montana.
A memorial service will be held 11 a.m., on Saturday, Nov. 2, at the Wilsall Community Church, 112 Liquin
Hills Lane, Wilsall. A reception will follow at the church.
Jeff was born on Dec. 19, 1964 in Downey, California to Charles and Sharon Burdette. Jeff moved with his
family to Wilsall, Montana in 1972. He graduated from the Wilsall High School in 1983. Jeff was active in sports and was an avid fisherman and hunter. After graduation, Jeff moved to Billings, where he received his Automobile Body Technician Degree and later received a Broadcasting Degree. He worked in several occupations throughout the years. He had fans following his comedian acts and Karaoke in Yellowstone County.
Jeff is survived by his father, Charles (Betty) Burdette; sons Charles Jeffrey and Jaiden Hunter of Billings; brother Jay (Susan) Burdette of Billings; sister Teresa (Mark) Evans of South Carolina; stepsisters Belinda (Tom) Schweigert of Livingston, and Valerie Chappell of Idaho; as well as grandchildren, aunts, uncles, nieces and nephews. Jeff was preceded in death by his grandparents and his
mother, Sharon.
Smith Funeral Chapel and Crematory was entrusted with Jeff’s care. After the service and reception, burial will take place at the Wilsall Cemetery where his mother is buried.
Any memorials may be directed to the Wilsall Community Church, Shields Valley Scholarship Program, or to donor’s choice.