To share your memory on the wall of Emile Ruffier, sign in using one of the following options:

Provide comfort for the family of Emile Ruffier with a meaningful gesture of sympathy.

We encourage you to share your most beloved memories of Emile here, so that the family and other loved ones can always see it. You can upload cherished photographs, or share your favorite stories, and can even comment on those shared by others.

Posted Oct 17, 2019 at 12:04pm
Sorry for your loss Brenda. Didn't know him personally but enjoyed reading his letters to the editor.

Posted Oct 17, 2019 at 12:09am
Being best friends with Doug, I spent so much time at your house that your folks must have thought they actually had four children. Like so many of that “Greatest Generation” Tish and Emile just took raising half a neighborhood along with their own children in stride. Your father like the men of his generation exuded that calm assuredness that everything was under control no matter the circumstances. Surviving the Depression and WW II had a way of instilling that kind of self reliance and depth of character. We share your heartache at Emile’s passing and sense that with losing Ruff’ the world despite all it’s richness is simply a somewhat less colorful place.
With profound sympathy,
MARY and ROCKY KERR
Comment Share
Share via:

Posted Oct 14, 2019 at 12:34am
Fond memories of both your parents back in the Young Life days of our lives. So sorry for your loss. Praying for you all at this time.
Michelle Olson
Comment Share
Share via:
PP 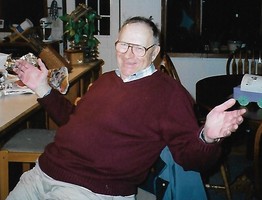