To share your memory on the wall of Ruth Urbaska, sign in using one of the following options:

Provide comfort for the family of Ruth Urbaska with a meaningful gesture of sympathy.

Like bird song on a summer breeze, I remember our mother’s voice as we sang her favorite melodies - Moon River, Stardust and Fly Me to the Moon - Mom playing the piano, with me sitting next to her - one of the precious mem... Read More
RUTH URBASKA

Like bird song on a summer breeze, I remember our mother’s voice as we sang her favorite melodies - Moon River, Stardust and Fly Me to the Moon - Mom playing the piano, with me sitting next to her - one of the precious memories I will always hold dear in my heart now that she has passed.

Awhile back, Mom and I talked about Dad’s passing. There had been so many times since then that Mom had wished he could have read his own obituary or attended his own Memorial Service. She had wanted him to know how honored and loved he was by all his family and friends.

So, it was an appropriate moment that I asked Mom if she would help me write her obituary. In what I would call a “sacred moment,” she and I wrote the following – often saying in between tears and sentences, “we won’t need this obituary for a long time, but it’ll be good to have it tucked away - for when the time comes.” That time came on September 28, 2019, when Ruth Eleanor Falberg Urbaska peacefully passed away in her sleep, after living nearly 96 years of a wonderful life.

To begin writing the obituary, I asked Mom, if she would like to say something special to her family and friends. Mom replied, “I am so grateful for the life I have had. I have a million beautiful memories of times spent with my family and friends. I have done more than I ever expected to and will leave this world with no regrets. I love you all dearly and thank you for making my life so meaningful.”

The daughter of Paul M. and Louella M. Falberg, Ruth grew up in Great Falls, Montana with her older sister Betty Jean. Both girls attended school through the 7th grade before moving to Sheridan, WY, when her dad was transferred with the Burroughs Corporation. While attending high school in Sheridan, “Ruthie” met “Johnny” at a school dance, and he would become her lifelong sweetheart.

After graduating from high school, Ruth joined her sister Betty at BYU before marrying John W. Urbaska in Billings, MT in 1943, while John was on leave from the Navy. Together they travelled with the Navy Department and made their homes in Coeur d’Alene; St. Louis; and Chicago. When John was sent to Jacksonville, FL for the Navy’s electrician’s school, Ruth moved to San Diego to live with her sister. John joined Ruth for a short time in San Diego, before being deployed to the South Pacific Islands. Ruth then moved to Billings where her parents had relocated.

After John’s Navy service, they decided to make their home in Billings and opened the Penguin Ice Cream Store in the early 1950’s. They were the first store in Billings to make ice cream on premise where customers could watch. They also were the first store to serve 33 flavors – and in those days, that meant a lot of hard work! Pumpkin at Thanksgiving and Cranberry at Christmas were special holiday flavors, and everyone loved them – the ice cream and the ice cream makers. The Penguin was a delightful destination for families taking a “Sunday Drive.”

Their son, Fred, and daughters Jane and Jerri were raised in the early days of the Penguin. When Fred needed specialized medical care, they sold the Penguin and moved to California for Fred’s care. Fred’s condition improved, and they moved their family back to Billings, where John became a sales representative for Winter Hardware Company. Their fourth child, Jim, was born in 1960. Ruth and John happily resided in Billings for over 70 years.

Ruth was primarily a homemaker and “stay-at-home mom,” and at various times in her life, she also worked for Carter Oil, Mutual Benefit Life, Hoiness LaBar Insurance and Security Bank. Ruth enjoyed many wonderful friends through the organizations she was associated with, including several bridge clubs, Jr. Women’s Club and YWCA. Most importantly she was a champion for her children. Actively involved as President of the grade school PTA, Den Mother for Cub Scouts, Troop Leader for Brownie and Girl Scouts, and Bethel Guardian for Jobs Daughters, Ruth was also an avid cheerleader of all her children’s sports activities – from baseball, basketball and football to swimming and majorettes – and cared for the family pets on top of it all: dogs, Max and Sammy; cat, Herman; rabbit, Snowbank; and a hamster whose name we’ve forgotten. There wasn’t a science fair project or a plate of cookies for a bake sale that didn’t have our mother’s touch on them. Always caring deeply for her home and family, Mom had a smart, practical, intuitive and often humorous approach. She must have cooked a million meals, done a ton of laundry, and always had a cheery “good morning” to greet us at the breakfast table in our sunny yellow kitchen.

As a family we enjoyed many camping and fishing trips where she and dad encouraged a love for the outdoors. They also had a sincere appreciation for the arts, and we fondly remember visiting artists’ studios during the holidays. Ruth and John were long-time supporters of the Yellowstone Art Museum and loyally attended the YAM art auctions ever since its inception – quite possibly motivated by their son, Jim, who annually contributes a painting to the Auction.

In their retirement years, John and Ruth traveled internationally and around the USA visiting their children and of course playing a little golf along the way. Ruth enjoyed birding with friends at the local Audubon society, and Dad and Mom always carried a pair of binoculars on their car trips, stopping to enjoy sites of birds and other wildlife.

Ruth liked to accompany John to his various club meetings, trips, and functions, and their special Dinner Club group was a great source of laughter over good food. They had many, many friends and could walk into a roomful of strangers and walk out with many new friends. Their knack for “social networking” was one of the hallmarks of their lives. So, it’s no surprise that of all the activities Ruth enjoyed, she most loved visiting with friends and family – over a meal, a coffee break with cookies, or on their deck with an ice cream cone in hand.

Ruth loved to care for their home and made every holiday special - from cleverly writing rhyming clues for her children to find their Easter baskets - to preparing delicious dishes for our Christmas eve smorgasbord and making our birthdays ones to remember.

Married for 73 years, when John passed away in March 2016, Ruth said, “but I just wanted more time with him..…” They were companions for life. Mom didn’t think of herself as brave or courageous, but moving to a senior living community and living on her own for the first time at age 92, was a brave step indeed. Ruth and John lived their values - love for God, family and friends; respect for others; honesty, integrity, and laughter. Their timeless values leave a beautiful legacy.

A Celebration Party to honor Ruth was held with family and friends in the summer 2018. We were so grateful that so many of her friends were able to attend. Mom cherished the memory of that gathering and also loved the recent family time we enjoyed when Jerri and Jim spent a long weekend in Billings. Mom felt wrapped in our love to the very end. She was completely at peace and quietly left this earthly dwelling in the early morning hours, just as she wanted.

A Memorial Spruce Tree has been planted in honor of Ruth and John at Veterans Park in Billings. A private family gathering will be held at a later date. The family wishes to thank all the staff at West Park Village Senior Living Community and Stillwater Hospice for their love and care. In lieu of flowers, please consider a donation to the Yellowstone Art Museum 401 N. 27th Street Billings, MT 59101 www.artmuseum.org; YWCA Billings 909 Wyoming Av Billings 59101 www.ywcabillings.org; or the charity of your choice.

Condolences may be sent to The Smith Funeral Chapel 927 S. 27th Street Billings 59101 or at www.smithfuneralchapels.com.
Read Less

To plant a memorial tree in honor of Ruth Urbaska, please visit our Heartfelt Sympathies Store.

Print
A private family gathering will be held at a later date.

We encourage you to share your most beloved memories of Ruth here, so that the family and other loved ones can always see it. You can upload cherished photographs, or share your favorite stories, and can even comment on those shared by others.

Posted Oct 04, 2019 at 08:30am
Urbaska Family, my thoughts and prayers go out to you in this time of loss. Jim, its hard to lose a mother but reading her obituary sounds like she was a wonderful mom!
Comment Share
Share via: 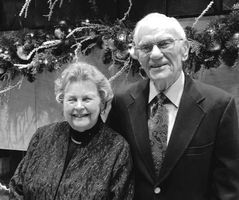