To share your memory on the wall of Linda Olsen, sign in using one of the following options:

Provide comfort for the family of Linda Olsen with a meaningful gesture of sympathy.

She grew up playing the piano and organ in church, attending elementary school in Sidney, Montana, before graduating in 1971 from Dawson County High School in Glendive. At the Glendive hospital, she worked as a dishwasher and later as a labor and delivery aide.

Linda attended Montana State University in Bozeman. In the fall of 1971 there, she met her future husband Pete in chemistry class. Linda graduated with a nursing degree in 1975, did her clinicals in Billings, and then worked as a nurse in Lewistown from 1975-76. She worked at St. Vincent Hospital in Billings from 1976-2003 where she served in the ER, in ICU, and on St. Vincent’s first flight team, which was the 10th medflight program established in the United States. She also served as house supervisor at St. V’s.

In 1977, she married Peter Olsen at St. Thomas Church in Billings. They raised four children--a teacher, a veterinarian, a horse trainer, and a nurse--at their place on Canyon Creek, west of Billings.

In 1996, Linda earned a masters degree in healthcare administration from the University of Colorado. Over the course of her career, she served as director of St. Vincent’s Help Flight, Emergency, and Strategic Development departments. She was the founding director of the Ask-A-Nurse program. Later she served as regional director of Marketing and Outreach. From 2003-2005, she was the executive director of Cardiovascular Services at Benefis Hospital in Great Falls. In 2005, she joined Billings Clinic as director of Regional Clinics, Primary Care (where she helped start the Internal Medicine Residency), and Occupational Health, Same Day Care, and Express Care. She retired from Billings Clinic on September 6, 2019.

She was always the one insisting on family photos during events and get-togethers and was particularly fond of her time with her grandchildren who called her “Mimi” and took every spare moment of her time. In recent years, she loved taking time to watch the grandkids, figuring out what made each of them tick. She loved finding all the attributes her grandchildren shared with her children. Linda had a deep motherly love for her daughters-in-law as if they were her own. Her animals and home were her sanctuary and welcoming to grandchildren. Family was always sure to find a couple quirky cats and friendly cowdogs at Mimi’s house. Linda was a “Sister on the Fly” and enjoyed traveling, photography, and creating jewelry. Her travels included nationwide dog shows, which culminated when her Irish wolfhound “C.C.” became an AKC “Champion of Record,” an accomplishment of which she was very proud.

On August 27th, Pete and Linda celebrated their 42nd wedding anniversary. Linda’s last days were spent surrounded by her husband, children, grandchildren, and other family members. Fittingly, she was also surrounded by colleagues and the Billings healthcare institutions she helped shape over her 44 year career. She will be missed on all those fronts.

She was preceded in death by her father John D. Riley, her mother Elizebeth E. Riley, and her brother Ronald Riley. She is survived by her husband Pete Olsen of Molt; her sister Joyce Riley of Helena; her brother David (Sue) Riley of Billings; her son Casey (Melissa) Olsen of Columbus, her son Jesse (Tierney) Olsen of Absarokee, her son Sam (Lacey) Olsen of Clearmont, Wyoming, her daughter Rette Olsen of Molt; and six grandchildren.

In lieu of flowers, memorials can be made in her name to The Glioblastoma Foundation to support brain cancer research. A memorial service will be held at 11 a.m., Saturday, September 21st, at Smith Funeral Chapel in Billings, 304 34th St West. Condolences may be shared online at www.smithfuneralchapels.com.
Read Less

We encourage you to share your most beloved memories of Linda here, so that the family and other loved ones can always see it. You can upload cherished photographs, or share your favorite stories, and can even comment on those shared by others.

Posted Sep 25, 2019 at 11:19pm
Pete and Family,
I'm so sorry to hear the sad news. I have so many wonderful memories. Sending my love, hugs and prayers.
Comment Share
Share via:
JN

Posted Sep 23, 2019 at 02:18pm
I was so saddened to hear of Linda's passing. She was such a dedicated person to her work and family. I know Cal believed in all her potential and was proud of her many accomplishments. May you be comforted knowing she lived a very meaningful life.
Judy Northam
Comment Share
Share via:
CR

Posted Sep 21, 2019 at 09:59pm
So saddened to read of Linda's passing. Our sympathies to all her family and friends. She was a great friend and colleague. Prayers for her and her family.
Comment Share
Share via:
CF

Posted Sep 21, 2019 at 10:24am
Pete and family. Our thoughts and prayers are with you. So very sorry for your loss. We pray God will be your strength. Larry and Cindy Graber
Comment Share
Share via: 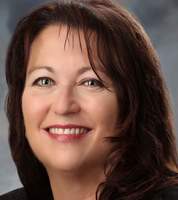