To share your memory on the wall of Kathryn Lyle, sign in using one of the following options:

Provide comfort for the family of Kathryn Lyle with a meaningful gesture of sympathy.

Kathryn Lyle, 86, of Billings, passed away naturally in her sleep the night after her family reunion in Wall, South Dakota. She was able to visit the family ranch for the first time in many years and talked with her su... Read More
Kathryn Emily Lyle

Kathryn Lyle, 86, of Billings, passed away naturally in her sleep the night after her family reunion in Wall, South Dakota. She was able to visit the family ranch for the first time in many years and talked with her surviving sisters, brothers, and cousins on Labor Day weekend.

Kathryn “Kathy” Lyle was known as a hard worker and was dedicated in jobs she held and to her family. She worked for Don Forbes at the Westward Ho/Juniper motel for 10 years. She enjoyed her work, and met many interesting people that spent a night or two at the motel. She later went to work for Billings Clinic in the housekeeping department, where she worked for close to 30 years. She enjoyed bringing treats and fun knick knacks to the doctors, nurses and staff at the hospital. She had a unique smile and a fun loving sense of humor. She worked until she was 84 years of age, not because she had too, but because she enjoyed getting out of the house and being around people. She is known among her family for her frequent drop bys to give thoughtful little gifts and her phone calls to check in on children, grandchildren and great grandchildren. She was an awesome mother to her children and their many friends that she transported to basketball, football and baseball practices.

Born in Wall, SD, a daughter of Christ and Emily Huether. She was a cheerleader at Quinn High School, in Quinn, SD, where she graduated in 1952. She married her high school sweetheart Daniel G. Lyle on December 27, 1953.

She is preceded in death by her husband Daniel Lyle, her sisters Ruth Pourier, Roseanna Shaffer, Phylis Kilpatrick, and her daughter Linda Dorsett, and a son in law Dave Martinez. She will be lovingly remembered by her 5 children, Donald, Terry, Dennis (wife Angela) in Billings, MT, Thomas, in Salt Lake City, UT, Cindy Martinez in Billings, MT, her sisters Delja Hoffman and Violet Smoot of Wall, SD, Marge Martin of Rapid City, SD, her brothers William “Sonny” in Wall, SD, and Leroy in Redondo Beach, CA. She was also blessed to have 10 grandchildren and 5 great grandchildren.

We encourage you to share your most beloved memories of Kathryn here, so that the family and other loved ones can always see it. You can upload cherished photographs, or share your favorite stories, and can even comment on those shared by others.

Plant a Tree in Memory of Kathryn
Plant a tree 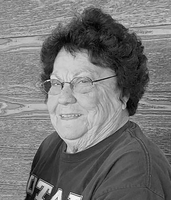