To share your memory on the wall of Dennis Michael, sign in using one of the following options:

Print
On Saturday, July 26th, 2019, Dennis Lee Michael went home to our Lord at Morning Star Memory Care in Billings at the age of 69.

Born December 6th, 1949 to Phillip and Irene (Kukes) Michael in Columbus MT, Dennis graduated from Park City High School in 1968 before attending Eastern Montana College. He then went on to dedicate more than 30 years of his life in service to his country, first in the Marine Corps Reserves, and later in the Montana Army National Guard. He married Marsha Fox July 3rd, 1970, and through this marriage was blessed with two daughters prior to their divorce in 1984. Dennis enjoyed golfing, bowling, archery, computers, and reading Western novels.

Dennis is survived by his daughters, Kimberly (Jesse) Benson of Three Forks and Bethany Monk of Carrollton, Virginia, as well as seven grandchildren, Kyra, Kayden, Aidan, Jesse, Kaliah, Evan, and Kendall; his brother, Randy (Tracey) Michael, and nephews Jordan and Jacob; sister Diane Michael; and numerous cousins and extended family members. Dennis was preceded in death by his father, Phillip, and his mother, Irene.

Graveside services for internment of the ashes with military honors will be Monday, August 5, 11:00 a.m. at the Yellowstone National Cemetery in Laurel.

The family would like to thank the staff at Morning Star Memory Care as well as the Stillwater Hospice Care nurses for taking such good care of Dennis and being so kind and helpful. In lieu of flowers the family would like donations to go to Alzheimer’s research( www.alz.org/montana), Montana’s Veteran Foundation (https://mtvf.org), or Montana Wounded Warrior’s.
Read Less

Posted Aug 07, 2019 at 05:45pm
I just learned of Dennis' passing. My sincere condolences to Diane and your entire family. I am glad he is at peace. His journey was not easy. Take care, Marianne, Canyon Creek Memory Care 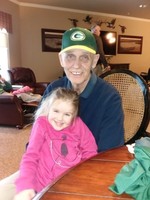