To share your memory on the wall of Thelma Green, sign in using one of the following options:

Thelma Lucille Allen was born to Charles Mae Allen and Theoline Volborg Osmunson Allen August 7, 1914 on her father's homestead fifty miles south of Miles City, Montana. It was a hot, busy day of haying, but Mrs. Parker, a midwife, assisted the birth. Twenty eight years later, as was often the case in those days, Thelma found that her birth had never been recorded. Frustration set in until her father and younger sister fulfilled the clerk and recorder requirements and a delayed birth certificate was finally issued.

Thelma began attending school at age 5 years. Viall School for grades 1 and 2, Allen School for grade 3, SY School for grades 4 and 5, and Allen School for grades 6, 7, and 8. Many of her stories from her early school days reflect adventures resulting from merely trying to get to school. In first grade, her older brother Nibs drove them in a two wheel cart with a brown mare "Brownie". One day a neighbor boy climbed on the cart and began driving, which moved Thelma to the back and onto the step for boarding. The wind was blowing and a car came around a curve and hit the cart. Thelma was thrown from the cart, unhurt, but the shaft was broken and was never fixed. Thereafter they rode horseback to school and she often said, “If I was crying before we reached the bridge, because of the cold weather, my brother told me to return home.” Going to school on the coldest of Montana winter days may have seemed daunting as a little girl, but Thelma delighted in telling these stories to later generations who could only imagine what ranch life must have been like in the early 1900s.

Her father built their ranch home, and growing up Thelma shared a bedroom with her sisters Edna Mae and Betty Jane. Her brother Nibs slept in the log cabin bunk house with the hired men. Her father became the first postmaster for Volborg, named for her mother, and part of the bunkhouse became the first Volborg Post Office.

As a child, Thelma cared for her horse “Buttons”, visited Yellowstone National Park with her family in their Model A, and just for fun, Thelma would lay an empty oil barrel on its side, jump on it and keep it rolling with her feet, keeping her arms outstretched for balance.

Thelma attended Custer County High School in Miles City her freshman, sophomore, and junior years. Her mother's health failed, so she stayed home her senior year to cook, keep-house, and drive her mother to doctor appointments. Her sister Betty Jane attended school during the week and lived in a boarding house, so Fridays during the winter Thelma drove a “snow boat” sled pulled by a team of horses to bring her home for the weekend. On Sunday, Thelma drove her back to school. Their mother died that year at age 48.

Thelma returned to Custer County High School for her final year and graduated in 1933 with future husbands William A. Green and Calvin Butts. Thelma worked for room and board and $1 per day at Gregory Flower Shop. She washed and ironed clothes, cooked 3 meals a day, clerked, made bouquets and funeral sprays, and drove deliveries. The owners allowed Thelma’s sister, Betty Jane, to share her room of one bed and a curtain for a wall, while she attended Washington grade school. Her previous grade school was closed for lack of a teacher.

After graduation, Thelma came to Billings with only a suitcase of belongings. She rented a room in a rooming house and worked for Kaufman Eckel Florists. Thelma also worked at J.C. Penny Company, and while there discovered her favorite uncle, Gus Allen, was color blind, as he would ask her if the pants he liked were green or brown.

Thelma and William Astor “Bill” Green were married Christmas Day, 1938. The minister said, "I've never married anyone on Christmas before.” Bill replied, "Neither have I." Bill was a timekeeper and they lived in a trailer that belonged to the Boespflug Construction Company, for the building of the Tongue River Dam. They moved to Billings the next winter as the company was building bridges on highways north of Billings. The summer of 1940, they drove their Nash sedan and pulled their Covered Wagon trailer house to Illinois. The company had a job to build 90 barracks in 90 days at Chanute Field in Rantoul, Illinois. Marilou Jane was born October 25, 1940 in Urbana Hospital in Urbana, Illinois.

Boespflug Construction Company sent Bill to work development on Seattle’s Ysler Hill in 1941, thus they lived in Seattle from 1941 to early 1945 doing defense work. Bill was an avid fisherman, and while in Seattle they enjoyed outdoor recreation, as in Montana.

They returned to Montana and lived for a year in Bozeman, where the company built the train tunnel east of Bozeman. They lived at 303 West Mendenhall and in the Evergreen Apartments.

By the end of 1945, they moved to Billings Montana and purchased a two bedroom home at 444 Grand Avenue. Bill worked for Riedesel Construction Company.

Their daughters Toby Sue and Linda Eileen were born April 6, 1946 and April 24, 1948, respectively. Thelma was a homemaker, an excellent cook, and devoted wife. Thelma was very socially active and she and Bill enjoyed dances at Jaycees, Elks, Shrine, Komas Club, and Yellowstone Country Club. Thelma belonged to Eastern Star and P.E.O. Chapter AE. She was a Girl Scout troop leader.

Tragically, Bill died in a plane crash December 3, 1959. Thelma gathered herself and attended Billings Business College. She worked briefly at McKessen Robbins, then was hired as a deputy clerk for the U.S. District Court and worked there for 1 1/2 years. She became the secretary to U.S. Judge William J. Jamison until his retirement in 1987. The Judge loved to walk, and each morning he would walk part way to work, and she would pick him up along the way. She was his secretary for 24 years, traveled to Washington, D.C. and San Francisco for work, and enjoyed her coworkers and meeting many law clerks through the years.

Thelma enjoyed traveling and took regular trips to Yellowstone and Glacier National Parks with her family. For her 60th birthday, she hiked into Granite Park Chalet in Glacier Park, six miles in and 16 miles out, with grandchildren and her white purse. The following years were hikes to Apikuni Falls and Iceberg Lake. A trip to Norway, the home of her mother's parents, was a travel highlight when she was in her 70s. Also in her 70s, she drove to Texas and New Mexico to trace her father's family roots and visit cousins. In her mid-80s, she toured Ireland and several small towns in Cotswold, England to visit locations her sister and brother in law had lived while he served as a pilot during and after WWII. Thelma loved a phrase she read one day in the Powder River newspaper, quoting two women who took a trip to Europe, “You can’t stay holed up at Pumpkin Creek your whole life.” This became Thelma’s travel mantra.

Thelma resided in her Billings home that she and Bill Green built in 1953. She was an avid reader and quilter. She enjoyed cards and played duplicate bridge. She solved daily crossword puzzles and corresponded faithfully with friends and family through cards and letters. She signed correspondence with her initials “TA” or “TAG”. Later, she proudly accepted the nickname “Great Thelma”, bestowed upon her by her growing number of great grandchildren.

In her last years, Thelma had many visitors and maintained her ability to articulate stories, keeping visitors on the edge of their seats and marveling at her incredible life experiences.

A huge “Thank you” to Senior Independence of Montana for providing 15 months of hospice care. Their loving care allowed Thelma to remain in her home.

A celebration of life service is planned for September 26th in Billings, Montana. Additional details will be announced.

We encourage you to share your most beloved memories of Thelma here, so that the family and other loved ones can always see it. You can upload cherished photographs, or share your favorite stories, and can even comment on those shared by others.

Posted Jul 31, 2019 at 05:15pm
It was a pleasure to get to know Thelma and to take care of her. I enjoyed every single moment spent with her. Such a special lady. Adios, sweet Thelma!
Comment Share
Share via: 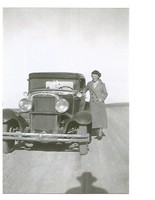 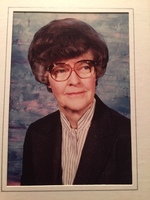