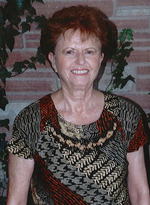 Inge Junghans was born in Goppingen, Germany on January 14, 1935.

The family left Germany just before World War II started on the last ship that would leave the country. The ship was headed to Shanghai, China. The family met Seventh-Day Adventist Missionaries who introduced them to the faith. Later on, all where baptized. Life in Shanghai was difficult. Some of the family almost died from starvation and unsanitary conditions. A very strong and determined Mother kept the family alive. The Lord spared Inge's life from death several times.

In 1947 the family arrived in Los Angeles, California. Inge was enrolled in advance classes since she studied very hard in China and was very advanced in her education. At 12 years old, Inge was put in the 8th grade and became valedictorian of her class graduating at the age of 13. She went on to high school and was voted "The girl most likely to succeed." She graduated a few weeks after she turned 17.

Inge started work as a Secretary and moved up to be an executive office manager with 7 employees under her. Around 1968, Inge got her Real Estate License. She eventually became a Broker and mostly sold houses exclusively for builders. She was very successful in her career.

Inge married Louis Junghans on November 6, 1955. In 1971, due to circumstances, she raised her children on her own as well as working full time.

In 1979 Inge, her children, and Mother moved to Placerville, California. Inge built her dream home on 6 acres in the Sierra Foothills. Inge took care of her Mother after her stroke for 7 years. Her Mother was her "rock" in life and she wanted to give back to her.

In 1996, after her Mother's death, Inge moved to be close with her children in Billings, Montana. Her children and grandchildren were her life joy and blessing.

In 1997, Inge was introduced to Melvin Gruel. The two of them developed a very strong friendship and fell in love. He was the love of her life. They have been together for 22 years. They traveled to many places and enjoyed each other's company.

Inge developed many friendships in life. She dearly loved her family and friends and developed close bonds with them. She had a passion to share Jesus with everyone she came in contact with. She was very sensitive to those in need.

Inge was very involved with her church and volunteered for many positions. God and her faith sustained her in life.

Along with her dear Melvin Gruel, she is survived by her son Steven Junghans (Belinda), her daughter Heidi Zakrzewski (John), 5 wonderful grandchildren, and a nephew.

Inge passed peacefully at age 84 on July 9, 2019. Her greatest desire is to see her family and friends someday in heaven.

In lieu of flowers, donations can be made in her name to Amazing Facts, PO Box 1058, Roseville, CA 95678. Website: give.amazingfacts.org