To share your memory on the wall of Michael Peterson, sign in using one of the following options:

Provide comfort for the family of Michael Peterson with a meaningful gesture of sympathy.

Michael “Mike” John Peterson was born in Billings, Montana on July 19, 1953 to Frank Peterson and Pat Brennan.
He grew up between Billings and his family’s ranch in Clark, Wyomin... Read More
OBITUARY OF MICHAEL “MIKE” JOHN PETERSON

Michael “Mike” John Peterson was born in Billings, Montana on July 19, 1953 to Frank Peterson and Pat Brennan.
He grew up between Billings and his family’s ranch in Clark, Wyoming. He went to school in Billings and in Nebraska where he forged lifelong friendships.
In 1971 Mike joined the Marine Corps and proudly served his country from 1971-1975. Upon returning from overseas, he married Cynde Lande and together they raised two beautiful daughters; Misty Dawn and Summer Joy.
Mike started working at Tractor & Equipment in 1976 and was a month shy of his 43rd anniversary with the company. He was a loyal employee, an encouraging mentor and a valued team member. His family always joked that most of his non-napping hours were spent at T & E and the rest were spent with his grandchildren, whom he truly adored.
Mike loved being outdoors. He would spend hours walking in the hills and fishing. He loved to take his family camping and shooting. He was fastidious about his yard and always proudly hung his Marine Corps flag for every special occasion.
Mike is survived by his daughters, Misty (Erin) Peterson and their children, Rylee, Gabrielle, Peyton, Jordyn and Carolee; Summer Peterson and her children, Tyra and Parker; one sister, Becky (Jeff Hanson) Benjamin and her sons Bryan (Lorrie) and Tom (Jennifer); His Uncle Mick Fraker; Sister-in-Law Dianna (JR) Means and their children Marnie (Andrew), Darren (Dounia), Mike (Wendy) and Matthew (Sarah); and Brother-in-Law Mike (Marilyn) Lande and his daughter Michelle.
A graveside ceremony will be held at the Yellowstone National Cemetery in Laurel, MT on July 10th at 10:00 AM with a reception immediately following at Eagles FOE, 313 W Main St in Laurel.
Read Less

We encourage you to share your most beloved memories of Michael here, so that the family and other loved ones can always see it. You can upload cherished photographs, or share your favorite stories, and can even comment on those shared by others.

Posted Jul 23, 2019 at 12:25pm
Cynde - Jim and I are saddened by Mike's passing. You and Mike were two of the first people that we met when we moved to Billings in 1976. We were all around the same age and enjoyed each others company. You and Mike were always so kind and welcoming. I can remember him standing in the rain, soaking wet outside our door to tell us he had a brand new baby girl named Misty Dawn. It was misty in the morning but by the time he got to our house (which was an 8'x36' trailer with no phone), it was pouring down rain and it was literally running off his face. His face was full of joy and after he told us, he was off and running. I will always remember that face that morning. Cynde our thoughts and prayers go out to you and the girls. May all your memories bring you some comfort. He was a good man.
I'm sorry that we were not in town at his passing. God's peace. Sibyl Schug
Comment Share
Share via:
CW

Posted Jul 08, 2019 at 01:07pm
I am a former co-worker of Mike at T&E for 6 years as the receptionist. I truly adored Mike, he was one of my favorites and could always make me laugh. His laugh was contagious and always made my day. Mikey P. (is what I always called him) will be greatly missed by many, I will miss running into him at the Laurel Walmart and getting my normal Mikey P. hug and laugh from him. RIP Mikey, fly high and never forget to stop laughing! -Chelsi Wetsch
Comment Share
Share via:
DS

Posted Jul 08, 2019 at 10:51am
So sorry to hear of Mike's passing. Mike and his family were great next door neighbors to us when we lived in Laurel back in the 80's. I know he will be sorely missed by many. God's blessing to Cynde, Misty, Summer and your families.
Comment Share
Share via:
LN

Posted Jul 06, 2019 at 08:40pm
Saddened by your passing but blessed by your friendship. The memories that will be cherished as a Father, Grandfather, Brother and Friend. A friend who will be deeply missed.

Posted Jul 05, 2019 at 02:45pm
On behalf of the T&E Parts Department - we send our deepest condolences to the family of Mike Peterson. Mike was a great man and a wealth of knowledge on Caterpillar Machinery. His passing has everybody in our dealership mourning. Godspeed, Mike.
Comment Share
Share via: 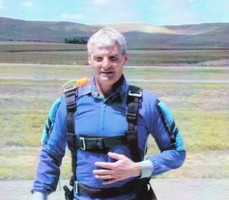