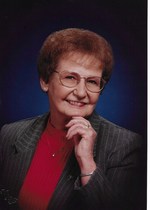 At the age of 90 years old, our Mother, Grandmother, Great-grandmother, Sister, Aunt and Friend, Margie Gabel Herman passed away on June 11, 2019, surrounded by many loved ones. She is now back in the arms of her husband and in the presence of Our Lord and Savior, Jesus Christ.

Margie was born in Fairview, MT on December 10, 1928 to parents Henry and Mabel Gabel. At the age of two, her family moved to the Huntley Project area where she grew up and attended school. After finishing high school, she met and married Freddie Herman Jr. and moved to Laurel. To this union two children were born, Ron and Linda. Freddie preceded her in death on July 1, 1995.