To share your memory on the wall of Taylor Larson, sign in using one of the following options:

Print
Our beloved Taylor Meade Larson was gifted to us on September 24, 1997 and unexpectedly taken from us on June 5, 2019.

As a young boy, Taylor was involved in baseball and Tae Kwon Do; coming close to earning his black belt. He never sco... Read More
Our beloved Taylor Meade Larson was gifted to us on September 24, 1997 and unexpectedly taken from us on June 5, 2019.

As a young boy, Taylor was involved in baseball and Tae Kwon Do; coming close to earning his black belt. He never scored a point at a tournament. When asked why, he replied: “I don’t want to hurt anybody, and you’re not supposed to hit girls”.

While in school, Taylor was involved in football, wrestling, track, FFA, and band. He loved hanging out with friends; in class, in the hallways, and at their bonfires. He loved welding and always gifted his creations to other people.

Taylor was a kind, caring, and giving soul. He would always pull out chairs and hold the door for others. He would also do anything asked of him without complaint. He would bring pellets into the house for his Grandma Nee Nee when she called; no matter the time of day or outside temperature. He would water his Grandma Ruth’s flowers when she needed it; no matter how hot or how many mosquitos.

Taylor loved hunting with his Dad, Grandpa Harvey, Grandpa Lonnie, and Uncle Jon. He loved fishing with family and friends. He loved all our family camping trips and the many memories made while playing 31 and sitting by the campfire.

Taylor was the first shinning star in his mother’s eyes, inseparable since his birth, and will always be her Gentle Giant. His father could not have been more proud of the man that he became. He constantly talked and bragged about him to everyone that would listen.

Taylor enjoyed the time he spent with his many friends. The bonfires, the movies, hanging out at the Expressway, shooting pool, or playing darts.

Taylor’s greatest joy in life was his little brother, Zachary, whom he was given the great honor of naming. When told he was going to have a baby brother or baby sister, he cried and exclaimed “I’m going to be a twin!” No truer words could have been spoken. They were alike in so many ways; looks, attitude, and we sometimes couldn’t tell they were 11 years apart in age. Even with the age difference, they were as thick as thieves. If we couldn’t find one; we looked for the other. They were usually together. The love they have for each other can never be measured.

Taylor is survived by his parents, Marc and Nichole; his brother, Zachary; his grandparents Harvey and Ruth Susott, Lonnie and Lynn Larson, and Les Tracy and Darlene Gilman; and many aunts, uncles, and cousins. He is preceded in death by his great-grandfather and great-grandmother Warren and Francis Meade; his great-grandmother Bev Nelson; his Big Grandma June Jones; and his aunt, Kathy Jones.
Turtle, we will always love you and you will forever be in our hearts! Love you Son! Until we meet again…
Read Less

We encourage you to share your most beloved memories of Taylor here, so that the family and other loved ones can always see it. You can upload cherished photographs, or share your favorite stories, and can even comment on those shared by others.

Posted Jun 10, 2019 at 03:38pm
Your entire family is in our prayers. There is no way to comprehend the tragic loss of a young man such as Taylor.
Know that his spirit will continue to live by his acts and deeds, and in a small way thru all the remembrances offered including this tree to be planted in his memory.

Posted Jun 10, 2019 at 01:49pm
Our entire family is heartbroken at the loss of Taylor. We were so lucky to get to know him as Cooper's best buddy, as a student-athlete at HPS and even for a short time, as an employee! Our prayers are with all of you during this time of sadness. We hope that the support and love of Taylor's friends, family and the HPS community will lift you up in your grief. Please know that we will never forget Taylor! The Vinton Family
Comment Share
Share via:
LM

Posted Jun 09, 2019 at 08:55pm
Taylor was one of my grandson Zacks friends. I met Taylor one day when he came to my house with the boys. The next time I seen him was at Zacks funeral. Taylor was there with the boys as they supported one another and to say their final goodbyes to their friend. Taylor is now with Paul and Zack and sitting before the Father Almighty. My condolences to the family and friends he leaves behind. Until we all meet again, fly high young man!
Comment Share
Share via:
VL 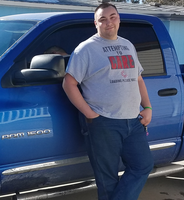