To share your memory on the wall of Donald Tilton, sign in using one of the following options:

Provide comfort for the family of Donald Tilton with a meaningful gesture of sympathy.

Print
no service is planned

Posted Sep 29, 2019 at 03:11pm
Donald Dean Tilton was only 60 years old when he was suddenly taken from us on June 2, 2019,
at 2:35 p.m. in Billings, Montana. The unanticipated loss was the result of end-stage pancreatic
cancer. Yet, Don was surrounded by his favorite rock music and those who loved him dearly, in
person and spirit, when he passed.

Don was born on October 20, 1958, in Minot, North Dakota, to Dorothy Martwick (d.1962) and
Lyle Tilton (d. 2017). At the age of three, he was adopted by Lloyd and Mae Tilton after his
biological mother and brother contracted polio.

Don married Tana Crater in Las Vegas, Nevada on March 20, 1987, and despite the many
challenges, their love for one another was undying. He raised and loved Tana’s two daughters,
Kerry and Nicole, as his own. They say you are only worth as much as the love you leave
behind, and he was beloved by many. His step-daughters felt he was an amazing father who
stepped up to a plate that another man left on the table. According to Nikki, Don understood that
family wasn’t always about blood but the bond you have with others.

Don was a tireless worker who will be remembered by his generosity, humor, and unorthodox
approach to life. He worked harder than anyone we knew, but he always said his dream job was
“testing mattresses.” He was a good man, always willing to give anything he had to friends and
family despite having little to offer. Don was an avid fisherman who enjoyed music, gambling,
and having a good time. Don will be memorialized by his silly rhetoric and crass humor, from sayings such as, “Oh gee golly whiz,” to more unconventional and abrasive phrases, such as “When I die, just throw me in a ditch.” “

Don was preceded in death by his parents, Lloyd and Mae Tilton as well as his biological parents
Dorothy and Lyle Tilton. He is survived by his wife Tana of Billings, and two step-daughters
Kerry (Steven) Huber of Billings, and Nicole (Adrian) Stout of Helena, brothers Ray (Ginny) of Chico, CA, Dennis (Darlene) of Livingston,MT, Vern (Marla) of Chubbuck, ID, Tim (Ann) of Helena, MT, Eugene of Golden, CO, Howard (LaCinda) of Casper, WY, and one sister Doreen (Thomas) Frazier of Fort Worth, TX, three grandchildren, and many nieces, nephews and cousins.
Comment Share
Share via: 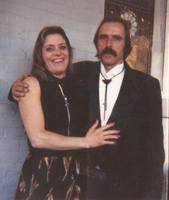