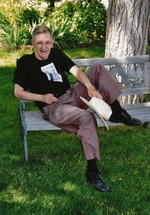 Alvan "Roy" Stiles passed peacefully on February 25, 2019.
Roy was born on April 6, 1931 to Alvan and Mary Stiles. He was the second of eleven children.
Roy attended the Davis Country School, west of Broadview, and the Kate Fratt Memorial Grade School,
in Billings, Montana. He graduated from Gonzaga High School (boarding school) in Spokane,
Washington.
After high school, he worked with his father on the family farm. From there, he spent some time
working with the Young Christian Workers in Chicago, Illinois, and later at the Catholic worker House on
Staten Island, New York.
He owned his business, Electronic Service and Dist., Inc. in Bozeman, Montana for nearly 40 years. In
2000, he sold his business and retired to Broadview, Montana.
He was never married or had children of his own, but took joy in spending time with all of his many
nieces and nephews. "Uncle Roy" holds a special place in the hearts of all of us.
He talked fondly of his time growing up on the family farm as the big brother to his many siblings.
He is preceded in death by his mother and father, Alvan and Mary Stiles, his brothers John (his wife
Carolyn), Pat Stiles (his grandson, Sterling), and his sister, Teresa (her husband Vern), and brother-in-law, Glenn Frey.
He is survived by his brothers Bert (Kathy), Rich (Sherry), Charley (Laurie), and Pete (Debi); his sisters,
Mary Doris Chambers (Bill), Pat Frey, and Margaret Petaja (Charlie); his sister-in-law, Colleen Stiles; and
his many nieces and nephews, great nieces and nephews, and great great nieces and nephews.
A celebration of his life will be on June 8, 2019 and 11:00 A.M. at the Assumption Church, nine miles
west of Broadview. It will be followed by a lunch reception at Pat Frey's house in Broadview, Montana.
In lieu of flowers, the family asks that donations be made to the Assumption Church Fund, c/o Stockman
Bank Billings, Montana.