To share your memory on the wall of Jean Gubser, sign in using one of the following options:

Print
With her daughter by her side, Jean Lewis Gubser, age 89, died peacefully of heart failure on May 16, 2019 at St. John’s United in Billings. A nurse, a professor, a mother, a grandmother, a great grandmother, an indomitable woman, and most of all ... Read More
With her daughter by her side, Jean Lewis Gubser, age 89, died peacefully of heart failure on May 16, 2019 at St. John’s United in Billings. A nurse, a professor, a mother, a grandmother, a great grandmother, an indomitable woman, and most of all a gracious lady, she will be sorely missed by many. She left a legacy of talented children, grandchildren, and great grandchildren, as well as hundreds of nursing students who went on to provide care to countless ill and injured patients.
Born May 4, 1930 in Columbus, Montana, Jean was the oldest of three surviving children of John K. Lewis and Mary Buttelman Lewis. (Her older sister, Florence Mae, died in infancy.). Jean was raised on the family’s “52” cattle ranch between Lindsay and Terry, Montana, west of Glendive. The 52 was founded in the late 1800s by Jean’s grandfather John Buttelman and uncle Nick. She attended a one-room school house, and rode to school on her Shetland pony, Pepper. A bright and studious girl, she was salutatorian of her 1947 graduating class at Dawson County High School. After high school she obtained her initial nursing degree at Columbus School of Nursing in Great Falls, and began her nursing career at the Northern Pacific Hospital in Glendive. She was a proud and independent professional woman. First licensed as a nurse on December 29, 1951, and holding Montana nursing license number 1525 until her death, she is believed to have been the longest continually licensed nurse in Montana history.
Jean married Thomas Koch by whom she gave birth to her two children, Katherine Joan (nee Koch) Murphy, and John Charles Koch. She and Thomas were later divorced.
Following work as a nurse in Dr. S.A. Olson’s office in Glendive, Jean returned to her studies and earned both B.S. and M.S. degrees in nursing from Montana State University. She then accepted a position on the faculty at the University of Northern Colorado in Greeley, CO. After three years in Colorado, she and her two children moved back to Great Falls in 1971 where she taught continuing education to nurses before joining the Montana State University faculty as a nursing professor in 1972. She taught senior medical/surgical nursing to hundreds of students at Montana State University’s nursing program in Billings, with clinical training at Billings Deaconess Hospital and St. Vincent Hospital until her retirement in 1981.
On November 17, 1979, Jean married Cecil Gubser, the retired Supervisor of the Missouri River Basin Studies for the U.S. Fish and Wildlife Service, and at the time the Executive Director of the Montana Association of Churches. They enjoyed 28 years of married happiness until his death in 2007. Avid birders and members of the Audubon Society, they traveled the country building their “life lists” of hundreds of birds sighted in the wild. Among their other favorite activities were camping in the West Rosebud River drainage and following their grandchildren’s activities.
Jean was also skilled in all the domestic arts. She created marvelous quilts, sewed dresses for her granddaughters, and cooked delicious and legendary holiday meals. She loved to garden, and continued that productive past-time until she was 88, sharing the fun with great grandchildren. She developed a fine collection of dolls, and was a member of the Heritage Doll Club.
A faithful Christian, Jean was active in the Mayflower Congregational and First Methodist Churches, and in Eastern Star. She was a member of Martha’s Circle at First Methodist. She was a member of the Billings Symphony Associates and participated actively in the annual Red Lodge “Festival of Nations.” For decades she enjoyed the Red Lodge Music Festival each year, and was proud to see grandchildren participate and one granddaughter eventually join the faculty. She owned and maintained two cabins in the Fountain Park Association in Red Lodge for the enjoyment of her family. In later years, she became very interested in genealogy, tracing her roots back to ancestors on the Mayflower, and even to 15th-Century European royalty. Through her research she found several Revolutionary War Patriots, including Ebenezer Blake who was with George Washington at Valley Forge. She joined the Shining Mountain Chapter of the Daughters of the American Revolution, and sponsored memberships in the DAR for her daughter and two of her granddaughters. She also very much enjoyed the regular meetings of the AN Chapter of the PEO sisterhood.
Jean was predeceased by her parents, her sister Florence Mae, her two brothers (John George Lewis and Keith LeRoy Lewis), and her dear husband, Cecil Gubser. She is survived by her son John Koch of Helena and his two children, Michael and Grace Koch, and by her daughter Katherine (nee Koch) Murphy (husband Gregory) of Billings, and grandchildren Megan (nee Murphy) Kenny (husband Ryan (Maj. U.S. Army)), Brian M. Murphy (wife Jenna) of Billings, and Allison (nee Murphy) Williams (husband Brett) of Portland, Oregon, as well as nine great grandchildren: John and Mary Katherine Kenny; Mary Therese, Michael, Bridget, and Shannon Murphy; and, Luke, John (“Jack”), and Connor Williams.
A memorial service will be held on Friday, May 31, 2019 at 2:00 pm at First United Methodist Church, 2800 4th Ave. N., Billings, MT 59101. Jean’s remains will be interred at Yellowstone Family Memorial Park at 3605 Grand Ave., Billings. Memorials may be made to the Red Lodge Music Festival, c/o Marlene Lawson, 1782 Crystal Drive, Billings, MT 59106.
Read Less

We encourage you to share your most beloved memories of Jean here, so that the family and other loved ones can always see it. You can upload cherished photographs, or share your favorite stories, and can even comment on those shared by others.

Posted May 27, 2019 at 03:00pm
Sending condolences to the family. My Mother Helen Lyons Janssen first remembers Jean as a young girl who was 4 years younger as they grew up on Bad Route and attended the same country school. Helen lived with Mrs. Buttleman (Grandmother) for two years as she went to High School in Glendive. I met Jean (Mrs. Koch) as she was one of my Nursing Instructor in Billings, I graduated from MSU in 1975 and remember her well. She did make a difference to so many. Our thoughts and prayers are with you at this time. Mary Janssen
Comment Share
Share via:
JR

Posted May 25, 2019 at 02:52pm
Dear Family, I'm so sorry to hear of the loss of your loved one, Jean. My sincere condolences to you. May you think of the many beautiful memories that you shared with her, and cherish those precious moments. May the God of all comfort caress your heart with his living promise to one day reunite you together again, in the future paradise mentioned at Revelation 21:4,5. Our Dear Heavenly Father Jehovah (Psalms 83:18) knows the many tears you cry, and He will sustain you, if you let him. I hope that you can find comfort during this difficult time. If you would like to learn more from the bible about why we die or why does our loving Heavenly Father allow so much suffering and injustice, please feel free to go to jw.org to find satisfying answers.
Comment Share
Share via:
M

Posted May 21, 2019 at 10:01am
With sympathy to the Gubser family in their loss of Jean. Death can be distressing. Lean on God. 2 Corinthians 1:3, 4. Seek support from family and friends. Proverbs 17:17. Find peace in the memories you cherish of Jean.
Comment Share
Share via: 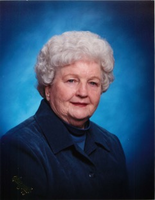