To share your memory on the wall of David Thom, sign in using one of the following options:

Provide comfort for the family of David Thom with a meaningful gesture of sympathy.

Posted May 18, 2019 at 03:14am
I met David through a friend, and lived with him as a roommate for a couple years, we continued to talk after I moved out via Facebook. we shared many interests and I was glad to share them with him. my condolences to his family, he will be missed.
Comment Share
Share via:
MD

Posted May 18, 2019 at 01:23am
David, you will be missed. I enjoyed communicating with you on Facebook, as your posts were always so witty. I remember when you and Isaac and my son Nick were babies playing together at Granny's house. Happy trails buddy. Marcia
Comment Share
Share via:
KF

Posted May 16, 2019 at 05:02pm
My sincerest condolences Thom family. David was definitely one of a kind and will be missed. You're all in my thoughts and prayers. God bless
Comment Share
Share via:
TR

Posted May 16, 2019 at 03:59pm
I was a co-worker of David for about that last 6 months and David was the coolest guy. Always friendly and happy and I am sure going to miss seeing his smiling face and boisterous personality at the store. He will be missed by us all!! Rest in Peace buddy. My thoughts and prayers are for the loved ones he left behind. Tina R
Comment Share
Share via:
MH 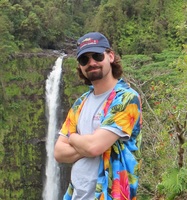