To share your memory on the wall of Esther Ostermiller, sign in using one of the following options:

Provide comfort for the family of Esther Ostermiller with a meaningful gesture of sympathy.

Esther's life revolved around her family. She loved tending to her vegetable and flower gardens, and cooking for her family, but especially baking for them.

Esther was preceded in death by her husband, Pete; her brothers Bill and Raymond Foos, and her sisters Lydia Harmon, Elsie Keil, Marie Ostermiller, Frieda Geffre, and Lillian Krum.

Esther's funeral service will be held at 11:00am with a viewing from 10 – 10:45 am on Friday, March 22nd at Faith Evangelical Church in Billings, located at 3145 Sweet Water Dr. Burial will be at Sunset Memorial Gardens.
Memorials can be made to the charity of your choice. Condolences may be shared online at www.smithfuneralchapels.com.
Read Less

We encourage you to share your most beloved memories of Esther here, so that the family and other loved ones can always see it. You can upload cherished photographs, or share your favorite stories, and can even comment on those shared by others.

Posted Mar 26, 2019 at 05:13pm
We are so sad to hear of Aunt Esther's passing. Jane had first met Esther several years ago, but after only a couple of minutes of conversation, it was like she had known her for many more years. Esther remains with us in memory and with God for eternity.

Posted Mar 20, 2019 at 09:41pm
Pete & Esther will always have a special place in our hearts. Know that you are in our prayers. The Fee Family
Comment Share
Share via:
ML

Posted Mar 20, 2019 at 01:09pm
Dear Larry and Debbie and the rest of the family: I'm so glad I got meet and to be around Esther. She has gone home, but will certainly be missed for now. I remember her for her loving and hospitable personality. What a great smile and sense of humor. We'll see her again. Marilyn Livers, Wheatland, Wyoming
Comment Share
Share via:
DS

Posted Mar 20, 2019 at 01:09pm
Larry and Debbie,
I was sorry and saddened to see your mom’s passing. She was a funny lady, a fun lady and a no nonsense mom even to us who were not her kids. As often as I spent time at your home on Concord, the memories are too many to write here. I’m certain I “frizzed” her brain with my goofy card playing, she was forgiving(?) of my daily appearances before school and she was a genuinely caring person. Our wishes for your respective families are good memories about your mom and quick healing for the hurt of her loss.
Judy and Dave Swoboda
Comment Share
Share via: 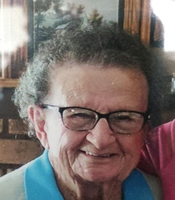