To share your memory on the wall of Ronald Reed, sign in using one of the following options:

During his early life, Ronnie was involved in all things livestock and cowboy. Riding and wrangling with Tony, his favorite pony, and tagging along to work with his father at the auction yards. He and his brother Rudy would ride their ponies from daylight to dusk in the open fields near the fairgrounds. When the circus came to town, they helped them set up in hopes of getting in for free. Their Dad sent them to Kuchera’s for boxing lessons, which came in handy in later years. When Rudy witnessed bullying, he sought his brother’s aide many times to help in teaching the bully a good blackeye lesson.

In May 1961 Ronnie started his 30-year career with the State of Montana - Board of Livestock as a Brand Inspector then sworn Investigator. As District Inspector for the Department of Livestock, he worked five counties and two auction markets involving large range operations to small cattle farms, feedlots to reservations. As District Investigator he worked three counties investigating criminal activity in the livestock industry. He knew the area, the folks and their brands well and gained the trust and confidence of the Sheriff offices.

Ronnie’s love for horse racing started back in the early 60’s when he helped train horses at the Beaumont Race Track in Belgrade, MT. Over the next 50 plus years, he was involved with the racing industry in many capacities. He was an outrider in Great Falls and Billings in the late 60’s before moving on to multiple official’s positions. One such position was his hiring as a steward at the racetrack in Glendive, MT. Over the next half-century, Ron dedicated countless hours to the industry. He worked for many of the race tracks in Montana as well as the Montana Board of Horse Racing. The last 10+ years, Ron served as the State Steward for racing in Montana, representing the board of horse racing at each meet, supervising all racing officials and enforcing the rules of racing. His love of animal, his Western beliefs and a commitment to fairness made Ron a natural authority for the Montana horse racing industry. His approach to his State Steward position earned him respect as well as a boundless number of friends.

Ronnie was a founding member of Montana Pro Rodeo Hall and Wall of Fame, along with Lyle Graves and other rodeo friends. He shared the vision of the Hall of Fame, and understood Montana had a rich heritage of rodeo champions, and wanted to honor their contribution to the sport of rodeo. The Founders of the Hall of Fame also realized the rodeo youth were extremely important to the future of the sport, so they created a scholarship program for the boys and girls of Montana high school rodeo. Ronnie’s efforts in this endeavor, his enthusiasm, hard work, passion and donation of his time and wealth to the Hall of Fame has resulted in $500,000 of scholarship awards.

Ronnie was not one to sit back after retirement or even during his working days. He always had things to do and people to see. He took vacation time to work on the filming of the movie Little Big Man (1970 release) as a horse bookkeeper and wrangler assuring horses were well cared for. Also, he set up as system to track the time each horse was used. Ronnie was a big booster for Billings and Montana. He was a Blue Blazer for the Chamber and drove his team and stage coach in the Western Days Parade, transported dignitaries from the airport, took the team and coach to parades in Calgary, Alberta, Canada and Sacramento, CA. Ronnie helped Bill Bernhart at Bill’s Custom Saddle Shop for many years cleaning and repairing saddles. He enjoyed the comradery with all the staff and customers and friends who would drop in for a visit.

Ronnie was a great generous guy, always thinking about the needs of others ahead of himself. He loved his lap cat, Coco, and she already misses him. We love you Ronnie and miss you so much!

In lieu of flowers, donations can be made to the Montana Pro Rodeo Hall and Wall of Fame Scholarship Program or the charity of your choice.
Read Less

Posted Jan 12, 2019 at 12:44pm
To Ronnie's family, I am so sorry for your loss. He was always very good to me while growing up, and always stopped to chat when he would see me out riding my horse. He was such a wonderful man, and he touched more people's lives than you probably know. Hope your memories warm your hearts while grieving the loss of such a good person. Tamra Hinman Herring
Comment Share
Share via:
BB

Posted Jan 10, 2019 at 09:10pm
Dear Family of Ron Reed,
So sad at Ronnie's passing, He and Hank had many hours and days on Pryor mountain , counting wild horses and checking brands. He was always a great friend and gentleman. He will be missed by all the rodeo and Cowboy people.
God bless all of you ,I remain in love and Sympathy, Always Betty Bratsky and Family
Comment Share
Share via:

Posted Jan 10, 2019 at 02:32pm
Cherish the fond memories during this difficult time. Our condolences to you and your family.

Posted Jan 09, 2019 at 10:20pm
Even though we were cousins I always called you Uncle. I will miss you. Say hi to Uncle Pinky for me and give him a hug.
Comment Share
Share via:
SL

Posted Jan 09, 2019 at 07:49pm
RIP RONNIE REED. We will miss you, a really nice, capable individual. I knew you and Mel and always had good relations with you both
Comment Share
Share via: 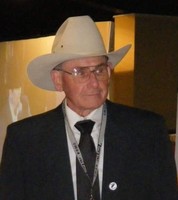