To share your memory on the wall of Odelta Thomsen, sign in using one of the following options:

Provide comfort for the family of Odelta Thomsen with a meaningful gesture of sympathy.

We encourage you to share your most beloved memories of Odelta here, so that the family and other loved ones can always see it. You can upload cherished photographs, or share your favorite stories, and can even comment on those shared by others.

Posted Dec 08, 2018 at 08:57am
Dear Vicky, Terry and Nina and families: I was very sorry to hear of Del's passing this week. I know what a wonderful mother, grandmother and sister she was to you all and that she will be deeply missed. Everyone who ever knew Del will miss her, too! I worked in the features department at The Gazette when she was librarian. Del was in our corner literally and figuratively! I'm not surprised to see that Del was valedictorian of her graduating class, because she was so committed to the written word and newspapers. She cared as much about what we wrote as we did and she worked hard to archive it all comprehensively and accurately. We shared many ups and downs of life and the news business along with lots of tears and laughter. Most of all I remember how much Del loved her family. She spoke so tenderly of Harold and her children. She was overjoyed when grandchildren came along. Nothing made her happier than when Scottie (those blond curls!!) visited her in the newsroom and she could show him off to all of us. After Del retired, it was fun to run into her and see how happy she was in her new retired, but busy, life. My heart goes out to you. Mary Pickett Parker
Comment Share
Share via: 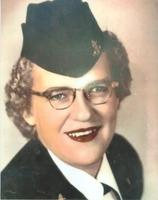